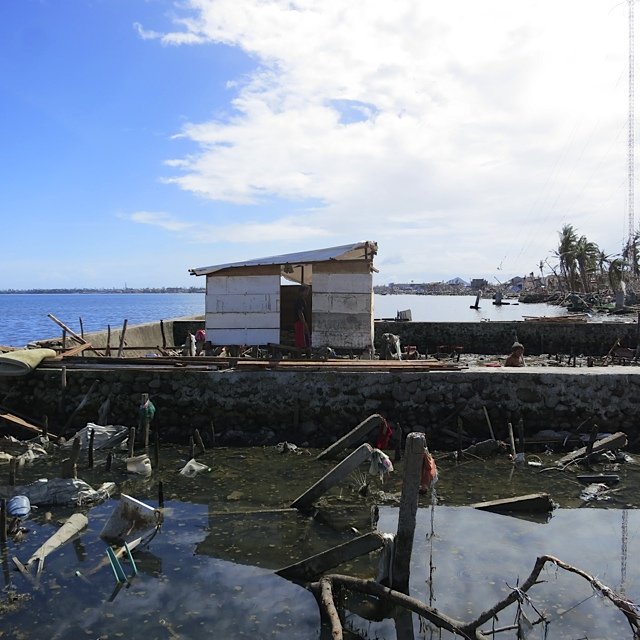 There is now an awareness that after typhoon Yolanda (Haiyan) hit central Philippines last 8 November 2013, infrastructure broke down, and not just roads and bridges, but also communication channels, power, water, transportation. Economic structures where subsistence co-exists with poverty also broke down, and there is now the immediate challenge for people to build livable structures as their housing. Structuring a whole response of sustainable cities and villages as a reality, beyond an architectural print-out, is the challenge the country faces.

Twenty days after, there are more than 5,500 dead, around 1,700 missing and 26,000 injured, approximately 11 million persons affected in around 12,000 barangays, 44 provinces, 580 municipalities, and 57 cities, around 3.5 million people displaced (with 3.3 million served outside evacuation centers, and 226,000 outside), 1.15 million houses damaged, PhP 13.2 billion (US$ 301 million) worth of damaged infrastructure, and PhP 11.4 billion (US$ 260 million) worth of damaged agriculture. Power, water, and communications are partially restored, the airport and seaport are functioning minimally. (Source: NDRRMC Update, SitRep No 45 Effects of Typhoon “Yolanda” (Haiyan), 27 November 2013, 6:00 pm)

The Central Bank of the Philippines and global investment banks are unanimous in saying that while there is an expected negative impact of the typhoon on the Philippine economy for the fourth quarter, the overall impact on the economy’s growth is “manageable.” But “manageable” is an inappropriate word for what the typhoon also laid bare and can be viewed as the greater disasters, and for which our country must better prepare and better respond.

Now that President Aquino has called for a comprehensive plan to rehabilitate and re-build typhoon-damaged areas, it is imperative that this plan is not approached in a business-as-usual mode and that this is not just about building back, but building better. Key elements identified by the task force are shelter and reconstruction, power restoration, livelihood and employment, resettlement and psycho-social care, environmental protection, and resource generation and allocation.

There were a few local governments that managed the pre-disaster evacuation with greater effectiveness, and so the disaster was greatly reduced for their area. This is a learning point and is a useful reference in the re-structuring of local government capacity.

A coherent list of capacities that local governments must have for preparedness, response, rehabilitation and recovery, and prevention and mitigation needs to be drawn up, and is where relief money can be better utilized, along with their regular funds from the national treasury, the Internal Revenue Allocation. One simple capacity for example is for water purification. A liter of drinking water can be disinfected by putting four drops of iodine, such as Povidone-Iodine/10% (®Betadine), and leave standing for an hour. There was such a lack of water for days, it’s as if this simple approach was forgotten.

Going through the wave of debris left on the shore, what was significant was the matchstick housing material made up primarily of 2x2inch (5x5cm) wood, round wood and pieces of plywood that are now being re-used in family shelter reconstruction. What was most obvious in the debris was the absence of 4x4in (10x10cm) or 6x6in (15x15cm) wood that would give structure to a habitation. Foundations, the structure of the buildings, particularly the spacing of purlins in the roof, need to be reviewed for low cost housing. If the government says there is no housing along the shoreline ever again, there has to be land allocation somewhere that allows the fishing community to operate. Obviously, the cost of land allocation cannot be borne by people of subsistence livelihood, and strategies must be designed and a process developed that will respond to this situation.

The Department of Education is set to release its guidelines on the use of schools as evacuation centers as there are concerns on class disruption and part of the recovery of a community is that children can get back to school the soonest possible. The school buildings generally remain occupied long after a disaster event, and the schools also need to be rehabilitated. Schools with a second floor, not on the shoreline of Tacloban, but in other municipalities, were safe and effective structures as would any building that followed the design of the Iglesia ni Kristo churches.

Sifting through the debris and reviewing the bits of structure that survived tell us a lot about how we cannot just simply re-build, but strategize so that one is not pushed to ground zero all the time.

There is at present much attention and national focus on the rebuilding of Tacloban City and Ormoc City, but we must not forget that it is not only these cities that suffered. The network of rural municipalities clearly lag behind partly because it does not have a central political voice, partly because it does not have a significant middle class, and also because in being rural, it is viewed being able to look after itself, i.e. subsist.

That however has been the flaw of the last century up till now, as people have lived by subsistence in the coasts and uplands of marginal provinces such as Samar, Eastern Samar, Leyte, Southern Leyte, among others. This is an economic and social disaster lived out environmentally by subsistence farming and fishing, now trashed by a storm surge, and laid low by the winds. How can a vibrant network be structured in rural Philippine society that uplifts people and provides an alternative and more secure livelihood and lifestyle?

We are now entering a dual phase in the post-disaster situation, shifting the focus from immediate relief, as the immediacy of relief is being met though still inadequate, to an interim period of response where shelters and services are built. We are also building towards an initial phase of livelihood in three months with basic vegetable production and it will be a two-year, five-year phase for those engaged in coconut farming. Fishing communities need boats, but all need a greater economic participation.

Livelihood is largely a rural concept that defines how things are held together within a family management structure as against a professional who will not refer to his or her work as a livelihood. Livelihood has much more social and environmental integrity. Unfortunately, many of the urban poor scrape together a livelihood because they are below the radar of the urban structured economy. These are the informal settlers who actually keep the economy in many respects afloat because of substandard labor practices, local markets, street vendors, dumpsites, junk dealers, and other informal sources of cash.

There is also a growing sense of global participation in understanding how to design cities and villages and not just responding to disaster and with the best that the global community can offer. The Philippines can respond to a new vision which is not an idealism, but a realism of the sustainable cities and villages that we need.