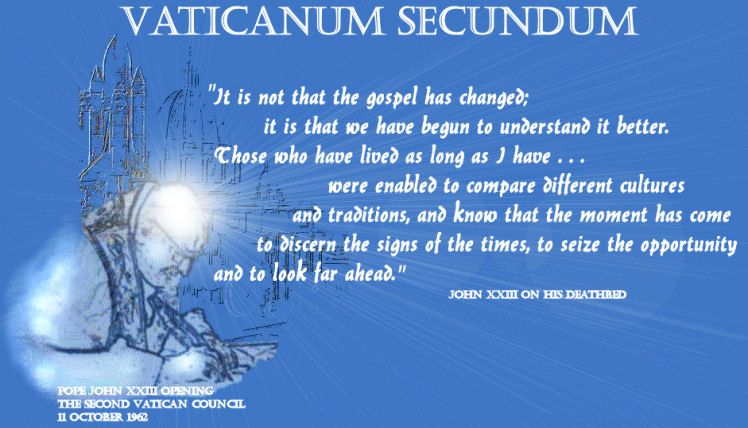 The Church is celebrating the 50th anniversary of the opening of the Second Vatican Council or Vatican II, arguably the most important event in the contemporary history of the Catholic Church.  Pope John XXIII convened the Council to adapt (aggiornar) the Church to a world that appeared new and surprising.  Instead of the European centralism of previous times, the Church felt itself fully universal and needed to talk openly with the world.

Vatican II ended in 1965.  The general conscience of the ‘60s was very optimistic about the capabilities of development in reducing poverty, and so the period after the Second World War was marked by tremendous growth in economic activity.  In 1960, Walter Rostow published his treatise The Process of Economic Growth that was a description of economic development as if it were a phenomenon almost mechanical, for Rostow was able to describe, step by step, the process leading to the development of peoples.

The two resulting ideological blocs in which the world was divided were competing in different fields: nuclear weapons, conventional weapons, the space race, and intense industrialization.  In the ‘60s and ‘70s of the last century, development was lived with profound optimism and its symbolic image is that of astronaut Neil Armstrong putting his foot on the surface of the moon.

But slowly growing as well was the awareness of the environmental impact of this period of fast industrialization.  In the US, the work of Rachel Carson and her book Silent Spring led to the banning of DDT (dichlorodiphenyltrichloroethane), a commonly used pesticide, in 1972.  Also in the same year, the Club of Rome published its report The Limits to Growth that marked public awareness of the risks of uncontrolled growth that threatens the very survival of the planet earth.

Vatican II ended when all this movement of reflection just began so we cannot look for a systematic treatment of ecological and environmental issues, but at the moment of its 50th anniversary, we can pick up some of its reflections that perhaps can help us today.  We want this to be also our small tribute to a Council that invited us to live the faith as the presence of God in the world and history.

Vatican II recalls how human work contributes to a better society and creation itself (Lumen Gentium 41).  It further states that according to the Bible, God himself found very good all that was created (Gaudium et Spes 12).  Creating and maintaining the universe by His Word, God gives men through creation an enduring witness of himself (cf. Rom 1: 19-20).

In the constitution, Lumen Gentium 48 is trying to overcome the duality, the apparent conflict between the earthly hope and transcendent hope.  The Council reminds us that human destiny is linked to that of all creation:

The Church, to which we are all called in Christ Jesus, and in which we acquire sanctity through the grace of God, will attain its full perfection only in the glory of heaven, when there will come the time of the restoration of all things. (cf. Acts 3, 21) At that time the human race as well as the entire world, which is intimately related to man and attains to its end through him, will be perfectly re-established in Christ (cf. Eph 1, 10; Col 1:20 , 2 P 3, 10-13).

This final restoration that we hope has already begun in Jesus Christ and also invites us, followers of Jesus, to join his task.  In another text of the Council (Gaudium et Spes 21) it reminds us that “a hope related to the end of time does not diminish the importance of intervening duties but rather undergirds the acquittal of them with fresh incentives.” Christian hope so understood makes us also responsible.  A responsibility that, as the Council reminds us, also extends itself from our present time to the future: “We can justly consider that the future of humanity lies in the hands of those who are strong enough to provide coming generations with reasons for living and hoping.” (Gaudium et Spes 31).