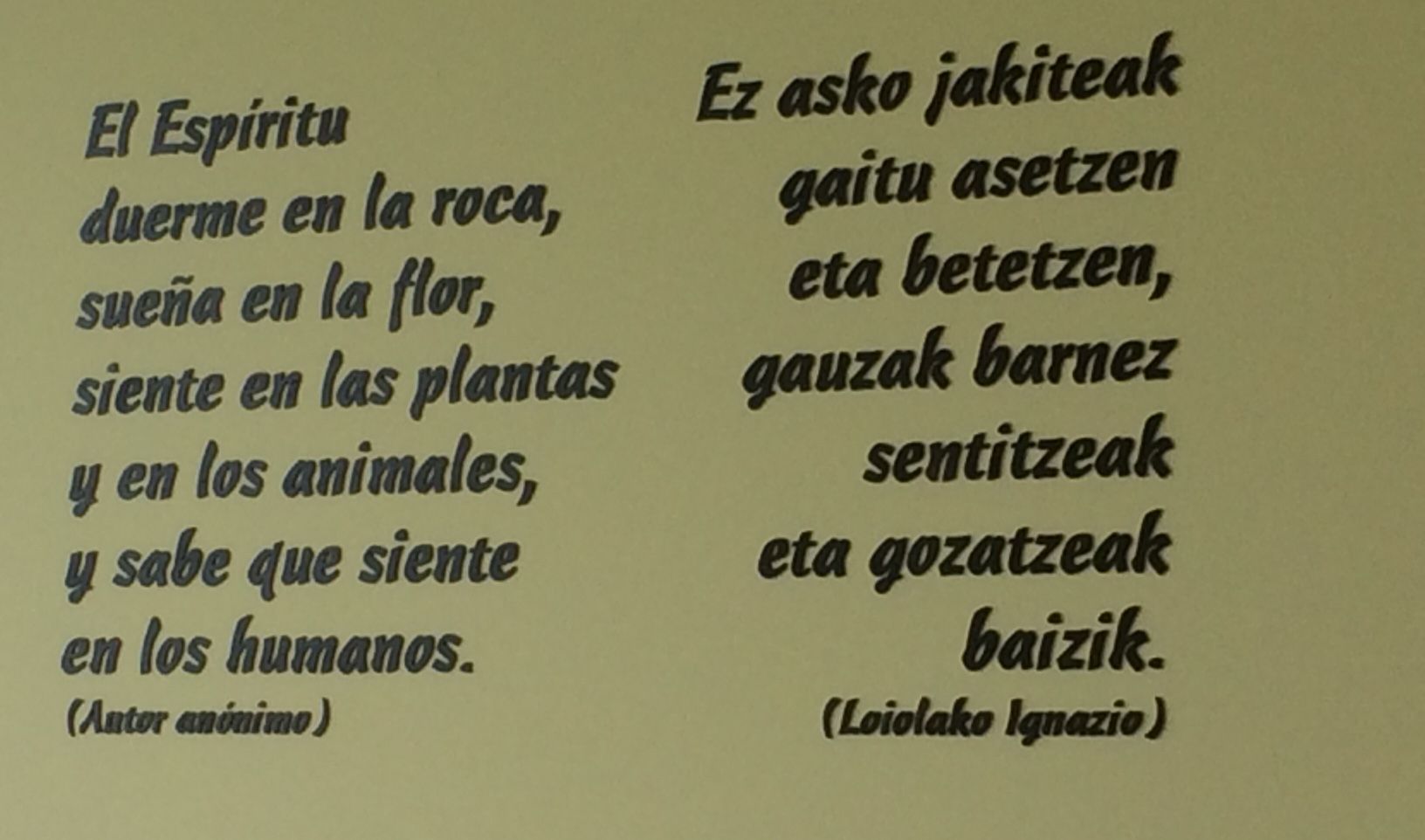 There is an increasing ecological sensitivity in human communities throughout the world.  Our conscience pains us as we behold the mounting evidence of environmental devastation: contamination of air and soil, accumulation of toxic residues, cataclysmic natural disasters, extinction of species, and extreme climatic phenomena such as floods, hurricanes, and droughts.  We realize now more than ever that our destiny is united to the life of the planet but that Earth itself is in danger of being destroyed by human actions.

Most worrisome of all is climatic change.  Global warming is having deleterious effects on all ecosystems.  The next few decades will be decisive in determining the kind of future coming generations will have to face.  In the coming century the environment will be a constant preoccupation and will require hard decisions.

The challenge we face involves our whole civilization.  The present consumer culture, based as it is on an unsustainable model of production, is a menace for all living beings on the planet, but we have not concerned ourselves with designing a model that is truly sustainable, one that produces jobs and basic goods for everyone, especially for the very poor.

We find ourselves at a crossroads, and we face challenges in many areas.  We need new green technology, new models of production, clean energy sources, and more rational consumer habits and lifestyles.  We need to protect threatened human communities and promote development in the poorest countries.  We need to foster a culture which respects and cares for nature.  We need to create sanctuaries for the protection of biodiversity and endangered species.  We need a system of global governance what allows us to find international solutions to these many challenges.  All this means that there is need for coordinated political, economic, and cultural action at the global level.  The challenges we face are complex.

Those who are most harmed by the present situation are the poor, especially those most exposed to environmental deterioration and natural disasters.  A productive model based mainly on the extraction of natural resources is displacing many communities from their traditional homelands.  Meanwhile, rural populations are suffering because of changing climatic patterns that damage their crops.  In the end, future generations will end up paying dearly for the prosperity of the most privileged members of the present generation. In the Society, concern about ecology is of fairly recent vintage although it does have some antecedents.  In 1983, General Congregation 33 commented on how the destruction of created nature by humans was linked to contempt for the “Love that Creates.”  In 1999, the Social Apostolate Secretariat published the document, “We Live in a Broken World: Reflections on Ecology.”  More recently, in 2008, GC 35 spoke of reconciliation with creation as an essential aspect of being reconciled with God and with other human beings.  The Congregation pointed out that the widespread destruction of the environment is threatening the future of the earth.  In 2011 another document appeared, “Healing a Broken World,” and it was accompanied by a letter of Fr. General in which he urged us to have a change of heart, be thankful to God for the gift of creation, and undergo a sincere conversion.

As Fr. Nicolás insists, we need to renew our hearts and undergo conversion.  Experience tells us that the simple prophecy of future catastrophes does little to move people to action.  We will be motivated to love creation and care for it only if we develop a heartfelt appreciation of it and feel grateful for its bounty.  Such an attitude will also help us to grow as human beings.

When we speak in the Society and in the Church of being concerned about ecology, there are three different but inseparable aspects that need to be taken into consideration.

The first aspect is care of nature, which means knowing it, loving it, and protecting it.  We must take an interest in life in all its forms and truly appreciate the nature that surrounds us.  In our Christian tradition all created realities refer us back to the Creator, and the more complex they are the greater is their capacity to reflect the divine.  Created things have a value in themselves; they are not simply there to be abused or degraded or destroyed.  Their intrinsic value should inspire in us an attitude of praise and of gratitude for created nature; such an attitude is profoundly Ignatian.  In recent decades Christian theology has been developing the idea that human beings are called to be “caretakers” of creation.  As in every family, the responsibility for caring falls more heavily on those who have greater capacity, and that is the role of human beings in the great family of creation.

The second aspect is defense of the most vulnerable persons, the poorest communities, and the future generations.  In the terrain we call ecological, the question of justice plays a major role.  The populations which are most innocent of destroying the environment are the ones most exposed to the consequences, the ones who will pay the highest price.  This is the great paradox: the countries that have most benefited from industrial development and have most damaged the natural environment by producing greenhouse gases are also the ones best prepared to defend themselves from the consequences of the devastation.

The third aspect involved in our commitment to ecology has to do with developing a new lifestyle.  The high-consumption lifestyle of the developed countries and of the wealthier sectors of the poorer countries is beyond the reach of the rest of the world because the planet simply does not have the resources needed.  Such consumerism is unsustainable and unjust.  We need a new type of culture.  Fr. Ellacuría, who was assassinated in El Salvador in 1989, used to speak of the need for a “culture of poverty” as opposed to the “culture of wealth” that is ravaging nature and exploiting human beings.  If we wish to maintain the substance of Ellacuría’s words while adapting them to our time, we can speak of the need for a “culture of shared sobriety,” that is, a culture that respects creation and sides with the most vulnerable human beings.  Such a lifestyle would allow more time and space for the immaterial gifts of human existence: friendship, contemplation, mutual listening, care for the weak, spiritual depth, and simple human enjoyment.

We are called to live in a more human way, which today means being lovingly respectful of life in all its forms.  Sobriety, solidarity, and simplicity of life will be the signs of a truly Christian lifestyle, and they will lead to a more enjoyable and more fulfilling life.

What we are talking about, therefore, is taking care of creation, defending the most vulnerable people, and discovering a new way to be human.  Clearly, the simple word “ecology” can hardly capture the richness of all these elements.  Instead, the last General Congregation of the Society spoke of “reconciliation with creation,” which is a more adequate expression of the task before us.  We need to continue to use the word “ecology,” however, since it establishes a bridge for dialogue with all those persons from diverse religious and humanistic traditions that join with us in defending creation.

Above all, we must strongly reaffirm that there is hope.  There are huge numbers of persons committed to protecting the environment: they are farmers, consumers, scientists, economists, business people, politicians, and many others.  There is a growing consciousness arising in every corner of the planet, and it is leading people to ever greater commitment.  The younger generations have developed an especially keen sensitivity in this regard; many of them are making radical options for a more modest lifestyle that avoids consumerism.

Religions have a crucial role to play in protecting the environment both because they can provide the spiritual motivation that is needed in this area and because they offer better ideas about what the good life really is.  As we said, a major part of preserving the environment has to do with adopting a new lifestyle, and that is what the religions are ideally suited to promote.  In our time, opting for life means defending all the living beings we encounter in our everyday existence.

The Society is trying to meet this challenge in different ways.  There are communities that reduce their waste or recycle their materials; there are others that have one vegetarian day a week or have eliminated private cars; still others keep track of their “carbon footprint,” use solar energy, save water, etc.  There are also many institutions – schools, universities, retreat houses, social centers – that encourage efficient energy use, devote resources to recycling, promote environmental consciousness, construct ecologically responsible buildings, and keep their campuses “green.”

Some institutions are especially dedicated to protecting poor communities that periodically experience the effects of natural disasters.  Others are accompanying populations that have been displaced from their homelands by gigantic industrial projects carried out in the name of progress.  Still others have been working for decades to show how alternative development models are more sustainable; they sustain human life even as they respect nature.  At the international level, there are initiatives that are helping people to develop a more mature sensibility and greater commitment.

But we still have a long way to go.  As we have said, the challenge before us involves our whole civilization.  We need to bring about a whole new way of being human, as individuals and as societies.  And given our present understanding of what is truly the good life, that means we are face to face with a revolutionary challenge.  The Earth finds itself at a historic impasse that is threatening the very life that inhabits it.  As persons called to be the image and likeness of God, the Friend of life, we cannot fail.