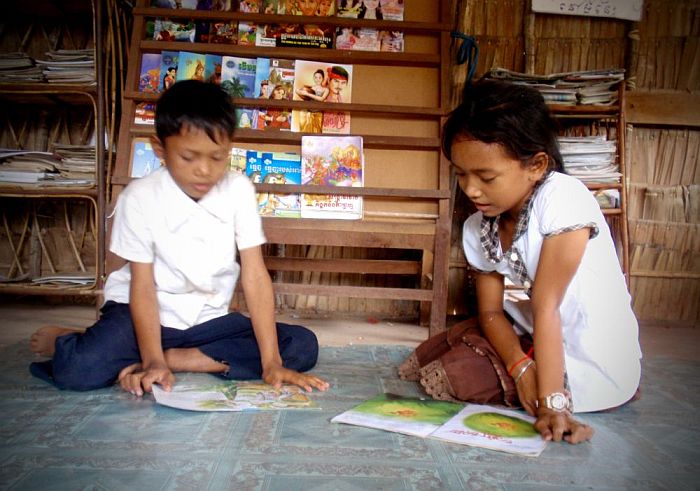 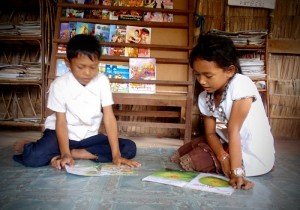 The Storybook Effect is part of the education program at the Jesuit Service Cambodia, producing storybooks for children which are then distributed to mobile libraries throughout rural villages in different provinces in Cambodia such as Phnom Penh, Kandal, Kampong Speu, Kampong Chhnang, Siem Reap, Battambang, Sisophon, and other areas.

Recently, the latest storybook was released titled “The Boy inside the Bubble” written by Gabriel “Gabby” Lamug-Nañawa, SJ.  Similar to the other storybooks published, this 23-page booklet is heavily illustrated.  The colored drawings depict the story of Som and his family, as they took for granted and wasted what nature offered, and learned the value of nurturing the environment.  Originally in English, the booklet also has a Khmer version.

According to Gabby, the story was conceived while he was in Australia in 2009.  “The concept of the story is not new, something like spaceship earth, but just to convey the idea of a finite and practically closed system on earth where whatever we do has effects on other systems and communities, many of which come back to us.  Also, the choices and situations that the boy encounters in the story are indicative of Khmer rural households.  Within the past 15 years or so, the Cambodian landscape and its use of its natural resources have been changing rapidly.  The story book hopes to convey to the young that what we do to our forests and rivers do have effects which will come back to us,” wrote Gabby in an email to Ecojesuit.

Since March 2005, these storybooks slowly, but surely and steadily, are changing the way children in the villages read.  On a daily average, the storybooks reach out to 10 children a day, around 300 children a month.  Themes include the environment, family, and good conduct, allowing children to experience their reality in a different way and contributing to value formation while learning to dream and creating life goals for themselves.

The Storybook Effect has its origins in the butterfly effect, where a small change in one place can result in large changes in other places.  Thus, something as small as the flutter of a butterfly’s wings is said to cause a typhoon halfway across the world.

In Jesuit Service Cambodia, they have their own “butterflies” that come in the form of glossy, colorful storybooks that “fly” out to Cambodia’s rural villages, where they touch the lives of many young children.  This is their Storybook Effect and there is no limit to how an individual can change the world.  It can begin with one flap, a single step, or it can begin with one book.

For more information on their book production, please visit Jesuit Service Cambodia.  A copy of The Boy inside the Bubble can be downloaded at ESSC.

One thought on “The Storybook Effect at Jesuit Service Cambodia”