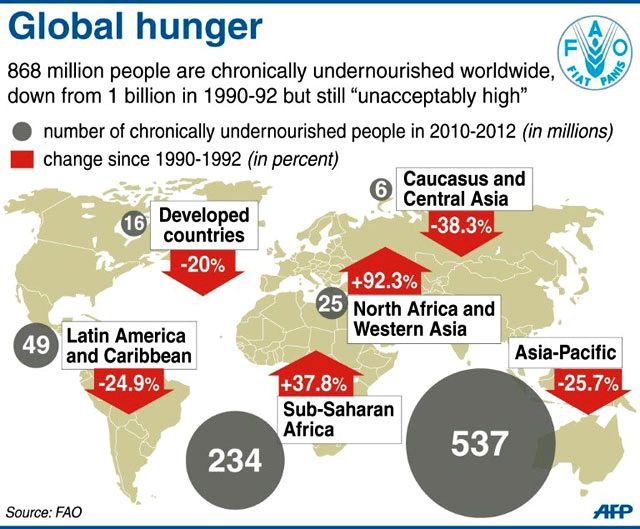 The World Food Day aims to draw attention each year on the dramatic reality of millions of people worldwide without access to adequate food.  The celebration of this day coincides with the publication of the report of the UN Food and Agriculture Organisation entitled The State of Food Insecurity in the World 2012 and aptly subtitled “Economic growth is necessary but not sufficient to accelerate the reduction of hunger and malnutrition.”  While hunger and malnutrition are related to economic growth, there is also the relation to the distribution of income, the question of gender, capacities development, and cultural issues.

Among the most relevant information from this report is that one in eight people are undernourished or starving.  The good side is that we are experiencing a continued reduction of hungry people in the world, specifically 130 million people less than 20 years ago.  If in the period 1990 to 1992 there were a billion people suffering from hunger in the world, that figure has now dropped to 870 million.  But 870 million hungry people is still a terrible figure. One of the Millennium Development Goals (MDGs) is to halve the proportion of hungry people by 2015.  From 1990-1992, the hunger rate was 23.3% and this MDG seeks to have only 11.6% of the world population in that situation.  We are currently at 14.9% which makes it possible to think that the objective can be met.  While hunger is reduced in Asia and Latin America, hunger grows in Africa.  What the report confirms is that hunger remains a significant reality of our time and we need to continue making efforts at all levels to eradicate it.

This year’s World Food Day proposes cooperatives as a model of social and productive organization that can help to meet the challenges of hunger by promoting a joint form of production and distribution.  Cooperatives crawl in some parts of the world, the image of collectivization imposed by totalitarian states.  However, the cooperative movement is based on a profound humanism trying to give all the attention to the producer (one person, one vote) and it tries to enhance productivity by integrating the supply chain, production, or distribution into the market.

Pope Benedict XVI also wanted to contribute to the celebration of the World Food day and in a message addressed to the Secretary General of FAO, he stated that:

“It’s not only to support cooperatives as an expression of a different form of economic and social organization, but to consider them a true instrument of international action.  Experience in many countries shows, in fact, that cooperatives, in addition to promote agricultural work, are a way that allows farmers and rural people to participate in the decisions and an effective instrument to achieve integral development in which the person is the origin and the end.”

The Pope added, “The Catholic Church – as it’s known – also considers the work and the cooperatives as a way to live an experience of unity and solidarity that can overcome differences, and even social conflict, between people and between different social groups.  So, with her teaching and her commitment, the Church has always supported the cooperative model, as it is convinced that its activity is not limited to a purely economic dimension, but it also contributes to the human, social, cultural and moral growth of those individuals and to the community they belong to.”