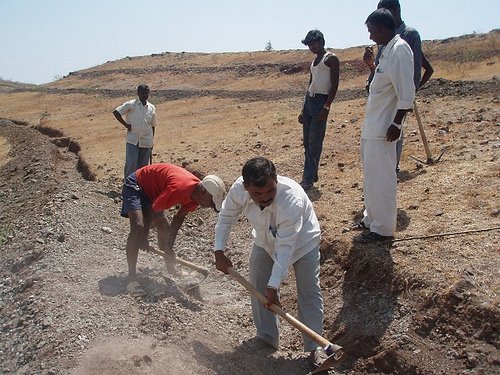 It was an ecological disaster: where today the visitor finds only steppe, there once stood dense forests.  These were cut down to gather building materials or firewood and the roots processed to produce charcoal.  And the worst aspect is that the area was not reforested.  When the rare but heavy rainfall  broke, the water could no longer seep into the soil, but poured immediately away, taking with it more and more soil particles: erosion and desertification continued.

The Integrated Tribal Watershed and Development Programme is an initiative of the Jesuits in the drought areas of western India, in the Ahmednagar district.  Robert D’Costa, SJ, supported by employees and friends, continues the work began in the 1960s by the Swiss Jesuit Herman Bacher, who developed the watershed method for re-greening quilted territory.

The watershed programme requires the whole village to be involved.  The inhabitants trace furrows from the mountain slopes down into the valley.  The furrows are re-filled with loose soil and planted with young trees.  When the rainfall starts, the water is caught in the furrows and seeps into the ground.  The roots of trees hold the soil, and the water table rises.  The local wells now contain fresh water again, barren fields can be irrigated and bear abundant fruit.  Up to now, 29 villages have already decided to participate in the watershed programme.

To keep livestock on the new green and fertile land was a dream of many residents from the beginning, but seemed difficult to achieve.  To buy a dairy cow was possible only for rich farmers.  A pilot project provided 150 dairy cows as micro credit to local farmers, who are now the owners.  The loan repayment is made possible through the sale of milk.  After about two years, they will have repaid the purchase price.  Once a cow is paid for, another family receives a cow.  This scheme continues until all families of a village possess a dairy cow.

Apart from ecological concerns, the project also responds to social challenges by setting up health and education programmes.  In several villages, kindergarten schools were built, and 520 children from 29 villages currently go to school.  Father D’Costa also managed to successfully attract physicians who examine and treat the villagers free of charge.  Sometimes a general practitioner comes along, sometimes a dentist, sometimes even a pediatrician.  The long-term aim is to integrate the communities into a full health system – step by step.

The author is a staff member of the Mission Procure of the German Jesuit Province in Nürnberg, Germany.  For more information on the watershed programme of the Pune Jesuits, please visit their website and Jesuit Commons.