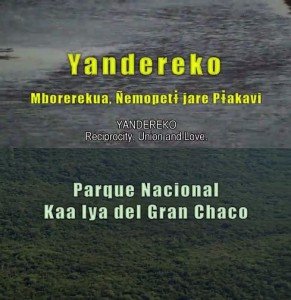 Early July 2013, two films by Rodrigo Abascal on the Guaraní-Isoseño people, their traditions, their protected area that is a national park, were released and shared with Ecojesuit through Carmen E Miranda L, Director of the Beni Biosphere Reserve in Bolivia.

The film Yandereko: Reciprocity, Union and Love (in Guaraní with English subtitles, and another one with Spanish subtitles) is about the Guaraní-Isoseño people’s traditions and their relation with the Kaa Iyas (the owners of the natural resources). These traditions are fading against modernity. This film intents to be an instrument to rescue their culture, and send a message to the young people to keep their traditions alive. (Total: 32 minutes)

Yandereko: Reciprocity, Union and Love, in Guaraní with English subtitles can be watched here.

The documentary El Parque Nacional Kaa Iya del Gran Chaco: La última oportunidad para el Chaco Sudamericano (The National Park Kaa Iya del Gran Chaco: the last opportunity for the South American Great Chaco) is about this protected area which was created through the initiatives of Indigenous Peoples who live in the surroundings of the protected area (the Guarani-Isoseños, Chiquitanos and Ayoreodes), to ensure their own survival as a culture and as peoples, providing the natural resources that are part of their living, and they play a role in the park’s management. This big protected area is part of a great mosaic of different conservation and management units which extend to the east and south of the Bolivian territory, and has to face problems in relation of the fast and aggressive advance of the agricultural frontier close to their boundaries, and the threats related to extraction. (Total: 27 minutes)

The films are presentations of the IUCN-National Committee of The Netherlands and the Nationale Postcode Loterij and produced by the Loefflab Foundation with collaboration from Savia Bolivia (Biodiversidad, Conservación y Desarollo Sostenible)  for What If…We Change.