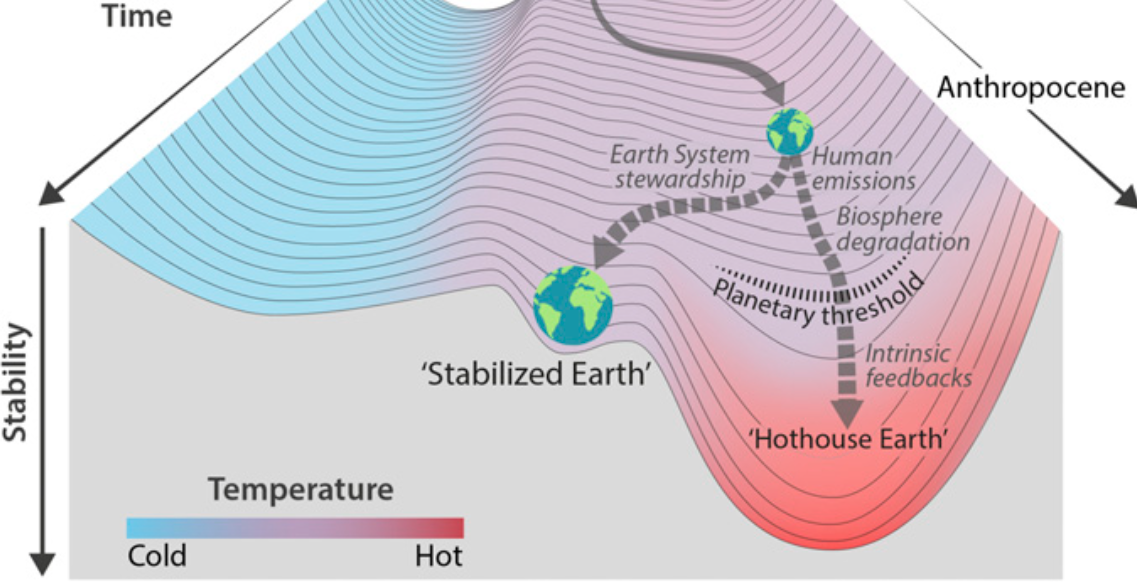 The Earth may be well on its way to an irreversible “hothouse” if people do not take urgent collective action to steer its path to a habitable state, scientists warned.

According to a recent study Trajectories of the Earth System in the Anthropocene published by the Proceedings of the National Academy of Sciences of the United States of America (PNAS),even if the target 1.5 degrees C to 2.0 degrees C rise in temperature under the Paris Accord is met, “a domino-like cascade” of biogeophysical feedbacks including the melting of polar ice, forest diebacks, and increased bacterial respiration in the ocean, coupled by annual greenhouse gas emissions “could take the Earth System to even higher temperatures.”

“Hothouse” is a term used to describe a “likely uncontrollable and dangerous” condition where global average temperatures could spike by 4 to 5 degrees C and sea levels could rise up to 60 meters higher than today, once the cascade of feedbacks causes the Earth to pass a tipping point.

In recent months, massive heatwaves were experienced in different parts of the world, including the UK, Canada, Norway, and Japan, breaking temperature records and causing forest fires and various health risks.  Meanwhile, exceptionally high rainfall brought by the monsoon led to massive flooding and landslides in India, Vietnam, Japan, the Philippines, and other parts of Asia.

Researchers behind the study said that while the crossing of this threshold is uncertain, it “could only be decades ahead” and at a temperature rise of ∼2 degrees C – possibly within the Paris Accord temperature targets.  Thus, there is an urgent need for a fundamental shift in the role of humans on the planet.

“This stewardship role requires deliberate and sustained action to become an integral, adaptive part of Earth System dynamics, creating feedbacks that keep the system on a Stabilized Earth pathway,” the PNAS study said.

The study describes Stabilized Earth as the alternative pathway to the “human-driven trajectory” that leads to Hothouse Earth, and it would take more than reduced greenhouse gas emissions to achieve this.

Researchers clarified that Stabilized Earth is not the same as the intrinsic state of the planet, but rather “one in which humanity commits to a pathway of ongoing management of its relationship with the rest of the Earth System.”

Among the present international efforts to reduce human impacts on the planet include the UN’s Sustainable Development Goals and the Paris Accord,along with carbon reduction and divestment initiatives by countries, cities, businesses, and individuals. However, the research noted that these are not yet enough to meet the Paris target.

Scientists said steering the planet into a stable and habitable state entails stewardship of the entire Earth System.

“Ultimately, the transformations necessary to achieve the Stabilized Earth pathway require a fundamental reorientation and restructuring of national and international institutions toward more effective governance at the Earth System level,” the study said.