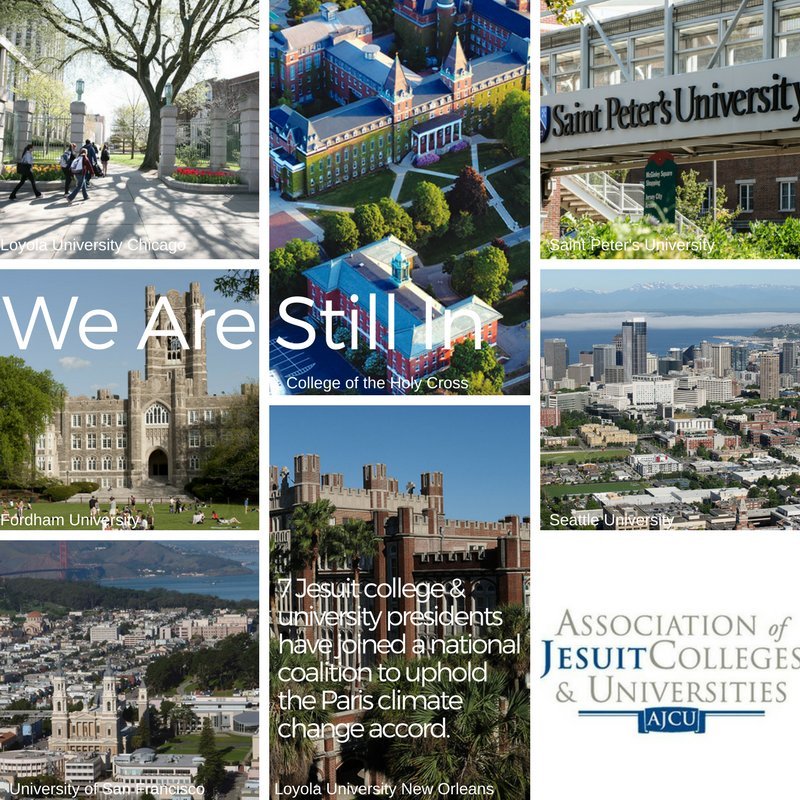 Presidents of US Jesuit universities signed on to We Are Still In, an open letter to the international community and parties to the Paris Agreement from 1,200 mayors, governors, college and university leaders, businesses, and investors in the US who are joining forces for the first time and declaring their continuing support to climate action to meet the Paris Agreement.

Together, these leaders are sending a strong signal to the international community and the 194 other parties to the Paris Agreement about the continued commitment of the US to ambitious action on climate change despite a withdrawal from the agreement at the federal level.  The signatories are collectively delivering concrete emissions reductions that will help meet America’s emissions pledge under the Paris Agreement.

“In the US, it is local and state governments, along with businesses, that are primarily responsible for the dramatic decrease in greenhouse gas emissions in recent years,” reads the statement.  “Actions by each group will multiply and accelerate in the years ahead, no matter what policies Washington may adopt.”

Signatories include leaders from 125 cities, nine states, 902 businesses and investors, and 183 colleges and universities.  Participating cities and states represent 120 million Americans and contribute US$ 6.2 trillion to the US economy, and include Oregon and cities like New York, Los Angeles, and Houston as well as smaller cities like Pittsburgh, Pennsylvania and Dubuque, Iowa.  A mixture of private universities, state schools and community colleges, both small and large, have added their institutions to the statement.  In total, the undersigned businesses and investors account for a total annual revenue of US$ 1.4 trillion and include over 20 Fortune 500 companies, including Apple, eBay, Gap, Google, Intel, Microsoft, and Nike, in addition to hundreds of small businesses, have also signed the statement.

Also, Georgetown University separately joined 11 US research institutions, signing a similar commitment.  “As a Catholic and Jesuit university, we believe caring for our environment is one of the most urgent moral and practical concerns of our time,” says Georgetown President John J. DeGioia.  The university also announced this week a socially responsible investing policy, with a goal to aligning the university investments to its commitment to environmental stewardship, as well as social justice, protection of human life and dignity, and promotion of the common good.

This story originally appeared in the Ignatian Solidarity Network.