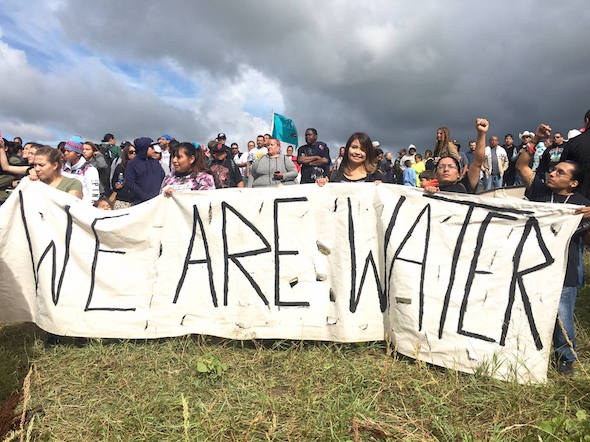 The US and Canada Provinces of the Society of Jesus wish to share with Ecojesuit their recent commentary on the decision by the US Army Corps of Engineers  to grant the final easement allowing the Dakota Access Pipeline (DAPL)  to be built under the Missouri River in North Dakota, USA, and doing away with the environmental review process that was initiated in the previous administration.

“The Jesuits of the US, together with the Red Cloud Indian School on the Pine Ridge Reservation and Saint Francis Mission on the Rosebud Reservation, are deeply concerned by the recent decision of the US Army Corps of Engineers concerning the Dakota Access Pipeline (DAPL).  The decision to issue an easement allowing the pipeline to cross under the Missouri River north of the Standing Rock Sioux Reservation is a direct response to President Trump’s 24 January memorandum urging the Army Corps to expedite the review and approval process.

“Suspending the Environmental Impact Statement (EIS) process previously ordered by the Obama Administration, which would have determined the safety, environmental and climate impacts of the pipeline and alternative route crossings, is morally unacceptable.  It is particularly troubling given the Army Corps’ previous determination that the pipeline crossing affects tribal treaty rights and that more study and consultation with tribes is required.

“The Standing Rock Sioux Tribe and the Missouri Tribal Nations have raised significant concerns about potential threats to their water supply and their legitimate rights as sovereign governments to be consulted and heard in the permitting process.  Lake Oahe and the Missouri River provide drinking water for the tribe and surrounding regions and millions of people living downstream from the project.

“Fr. Timothy Kesicki, SJ, president of the Jesuit Conference, the organization that represents the Jesuits in Canada and the US, said, “Jesuits have been working beside and ministering to native peoples for centuries.  We stand in solidarity with native peoples in Standing Rock and around the world who are advocating for environmental and human rights in the face of extractive industry projects.  Like Pope Francis, we recognize that water is a fundamental human right.”

“According to Robert Brave Heart Sr., executive vice president of Red Cloud Indian School on the Pine Ridge Reservation in South Dakota, ‘The DAPL poses a serious threat to the health and well-being of not only the Húnkpapha Lákhota of Standing Rock and other native peoples, but millions of people who depend on the water of the Mníšoše (Missouri River) and the great Hahawakpa (Mississippi River) systems.  This is just another example of the many countless acts of genocide, racism and injustices that the indigenous peoples of this continent have endured for the last 500 years.  Despite that, we are still here and will continue to fight for our rights, freedom and dignity!’

“Rodney Bordeaux, chief operations officer at Sain Francis Mission on the Rosebud Reservation, said, ‘As with our ancestors, we must be steadfast, vigilant and proactive in our efforts to protect our rights.  Standing Rock has given us worldwide exposure, and we must continue the momentum in a positive way, through prayer and the guidance it provides.’

“Fr. Kesicki added, ‘The injustice facing native people at the Standing Rock Sioux Reservation is emblematic of perennial concerns facing indigenous communities nationally and globally due to an economy of exclusion.  As the Society of Jesus emphasized at our recent 36th General Congregation, ‘The current economic system with its predatory orientation discards natural resources as well as people … The direction of development must be altered if it is to be sustainable.’  We must prioritize the needs of people over profit, promoting human dignity and care for creation and pursuing integral human development.’

“We invite people of goodwill, as well as members of Congress to call on the Administration to reverse this decision and we applaud those members of the House and Senate Natural Resources Committees who have done so.”