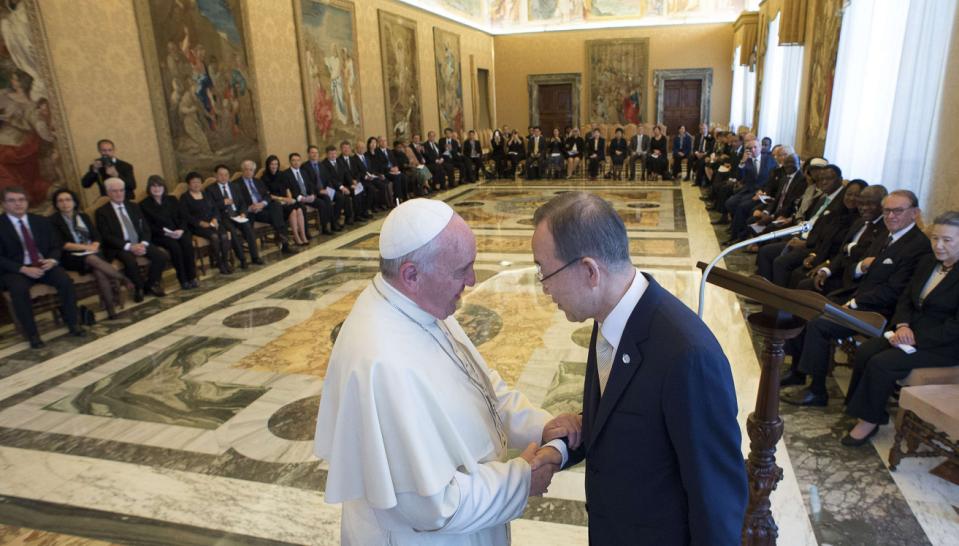 For example, corporations engaged in the production of genetically modified organisms (GMOs) and that wanted to improve the public image of these technologies managed to organize several meetings with these Pontifical Academies. It happened especially in 2009 at the meeting entitled “Transgenic Plants for Food Security in the Context of Development.” These events provoked significant public reaction, especially from different Church grassroots groups facing the negative impacts of these technologies in their daily lives, especially as regards the dependence on seeds, the linkage to the pesticides produced precisely by the same corporations, and the new resistance to pests that are being generated.

We are also witnessing recently a renewed concern of the Pontifical Academies to seek a commitment on issues related with natural resources and sustainability.

Last 28 April 2015, the two Pontifical Academies of Sciences, with the Sustainable Development Solutions Network and Religions for Peace, organized a workshop titled Protect the Earth, Dignify Humanity: The Moral Dimensions of Climate Change and Sustainable Humanity.

The goal of this workshop, which took place in the Vatican, was to help strengthen the global consensus on the importance of climate change in the context of sustainable development.

Speakers at the workshop were UN Secretary General Ban Ki-moon, Cardinal Peter Turkson-President of the Pontifical Council for Justice and Peace, Professor Jeffrey Sachs-Director of the UN Sustainable Development Solutions Network, and Ecuador President Rafael Correa, among other religious leaders and prominent figures of science and social analysis.

The workshop produced two outcomes: the Declaration of Religious Leaders, Political Leaders, Business Leaders, Scientists and Development Practitioners and Climate Change and the Common Good: A Statement of the Problem and Ten Demands for Transformative Solutions.

The Declaration of Religious Leaders states that “human-induced climate change is a scientific reality, and its decisive mitigation is a moral and religious imperative for humanity.” The Declaration also stresses the linkages between climate change and poverty, the contributions from technology, the need to reduce military spending in order to promote peace and sustainable development. Finally the Declaration expresses strong support to the forthcoming climate summit in Paris, COP21, and the new Sustainable Development Goals proposed by the UN.

The Declaration is a powerful endorsement to UN initiatives and shows support and engagement from faith-based communities. Anthony Annet, a climate change and sustainable development advisor at the Earth Institute at Columbia University, declared that “it was remarkable and inspiring to see top scientists and top religious leaders singing from the same songbook – the religions affirmed the science, and the scientists affirmed the moral dimension of the problem.”

The second document, Climate Change and the Common Good, is an official declaration of both Pontifical Academies of Sciences and Social Sciences. The members of these two Academies are well-known scientists, not necessarily Christians, appointed by the Pope and are ready to contribute to the discussions of scientific issues and their moral implications.

Cardinal Turkson called for a course correction towards the idea of sustainable development, a holistic and ethical approach that links economic prosperity, social inclusion, and protection of the natural world. This in turn calls for an all-embracing moral imperative, “an enfolding charity that radiates outwards from self to others, from those alive today to those not yet born.” It calls for a “full conversion of hearts and minds, habits and lifestyles, structures and institutions.”

Global climate change adversely affects every aspect of our civilisation and thus should be a matter of serious concern across all world religions. The words of Cardinal Turkson are always carefully listened to, as it is well known that the Council for Justice and Peace that he presides is among the teams responsible for drafting the papal encyclical on ecology that will be publicly released in June 2015.

As expressed by UN Secretary General Ban Ki-moon in his opening address, “Science and religion are not at odds on climate change. Indeed, they are fully aligned.” He shared that the new Sustainable Development Goals, which will be adopted in September, provide a holistic approach that puts social and environmental objectives at par with economic objectives. “Eradicating extreme poverty, ending social exclusion of the weak and marginalized, and protecting the environment are values that are fully consistent with the teachings of the great religions.”

These proposals are carried to the international conference that will take place September 2015 during the UN General Assembly in New York, USA that seeks to adopt a new, universal set of Sustainable Development Goals.

After meeting with Pope Francis, UN Secretary General Ban Ki-moon declared that “mitigating climate change and adapting to its effects are necessary to eradicate extreme poverty, reduce inequality and secure equitable, sustainable economic development.” He also added that “climate change is intrinsically linked to public health, food and water security, migration, peace and security. It is a moral issue. It is an issue of social justice, human rights and fundamental ethics.”

The workshop, with its significant theme and the participation of key experts and global leaders, shows a renewed and fresh commitment of the Vatican to the major challenges of climate change and sustainability. With such kind of gatherings, we can only feel motivated to continue caring for our ministry of reconciliation with creation.

Pope Francis is placing himself at the very front of the Church on environmental issues and what matters now is that when he gets underway, he will find many Christians behind him, many communities supporting his prophetic role. This is what really matters now.