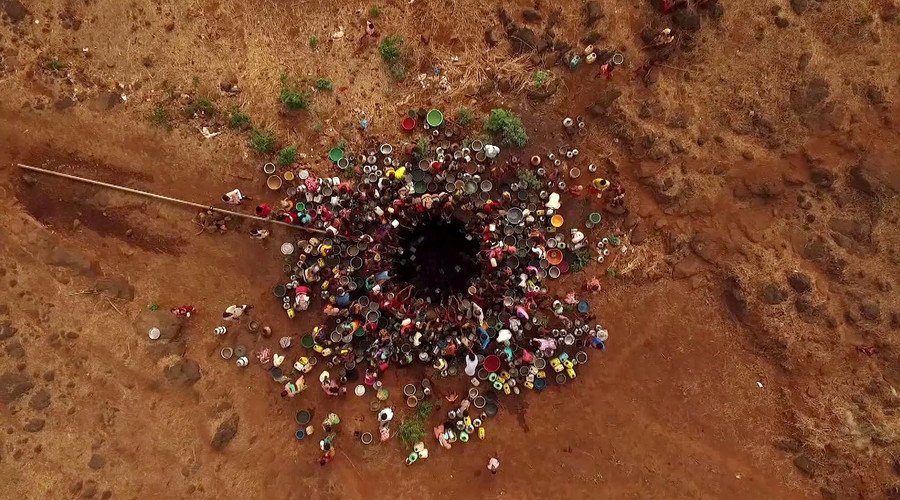 Ecojesuit shares the story of the millions of people in India who are challenged with extreme drought.  This article is based on a short documentary released in 2016, H2WOE: India’s Water Crisis: A Warning to the World, by the documentary channel RT Doc. The 25-minute documentary retains its relevance as millions in India currently struggle with their worst water crisis in history, as Cambodia prepares for drought, as the Philippines reckons with a weak El Niño causing drought in main food-growing areas and exacerbating mismanaged water distribution systems in Metro Manila and other cities, and as South Africa continues to struggle for access to clean water.

In the outskirts of rural India, residents of Keshav Nagar Village depend entirely on a tanker for their weekly water supply. Rations are limited to eight liters per person. Their personal, household, and farming activities are all dependent on this water tanker supply which must travel 40 kilometers just to deliver water. As all the wells have dried up, and the reservoirs eroded, there are no other nearby water sources. If the tanker does not come, there is no water. This and other stories on the alarming water crisis in Punjab, an agricultural state in India, are shared in H2WOE: India’s Water Crisis: A Warning to the World, and captures both the environmental and human consequences of the severe drought that has plagued thousands of villages in the country over the past few years. It is an eye-opening take on what could very well be India’s own Day Zero.

According to the Organization for Economic Cooperation and Development, total water demand in India is expected to rise by over 70% by 2025, with millions projected to be without a secure source of clean water. This runs parallel with projections at the global level,where demand for water is expected to exceed supply by 40% in 2030.

The Green Revolution – development at a cost

“There’s a natural cycle but people ruined it. They chopped down forests as far as the eye can see. That’s what triggered global warming. It’s cold in summer, rains in winter and it’s hot when it should rain. That’s what it’s like now. Only mankind is to blame.” (a village member speaking in the documentary)

India enjoyed a boom in agricultural production from the 1960s to the 1970s during the Green Revolution, a period of massive public investments in land use change and agriculture. This led to significant strides in both economic and social indicators as farmers enjoyed increased incomes, better quality of living, and the country’s GDP rose at a healthy rate.

These developments come at a steep cost which has only now been unearthed. Because of the cumulative effects of environmental stressors – widescale irrigation projects, deforestation, pollution – wells which were once filled to the brim are almost empty, reservoirs which used to nourish the earth are eroded, and fields which should be full of crops are left barren and at the mercy of unpredictable rain patterns. The rains are now a rarity, considered a blessing when they do come, but still hardly enough.

A drought of life

“For the first five years you don’t get a crop. As with children, you raise and take care of them. As soon as they began to fruit, they got sick. All I can do is cry.” Sopan Patilba Dhurut, Karanjgao Village, Maharashtra

Farmers are among those affected the most, not just financially, but also mentally and emotionally. In the documentary, one farmer suffers from bouts of depression because his crops would not grow. Left with no other options, he, like many others, was forced to pay for water to irrigate their lands, trapping them in a cycle of debt.

This grim reality eroded both the soil and the hearts of many rural villagers. Three to four bodies are reportedly found in the Punjab rivers daily, a figure not reflected in official police reports which claim that no bodies are ever found.

This phenomenon of rural suicides is tracked by Inderjeet Singh Jaijee, Chairman of BABA NANAK Educational Society, who explains that many farmers go bankrupt while paying their debts. The unpredictability of rain patterns in a changing climate further exacerbates the problem, making death an enticing option.  This is often done through drowning, one of the most common means of suicide in the country.

The epidemic has grown to alarming proportions, and has reached a point where some locals have made a business out of recovering bodies. The recovered bodies are “sold” back to families and loved ones. If a body is recovered but not claimed, it is returned to the river.

Flowing from the past

The crisis in India draws many parallels with those in other countries, most notably that of Cape Town, South Africa. In early 2018, Cape Town drew headlines around the world when the municipality faced a looming Day Zero, a time when municipal water supply would no longer be available. The local government acted swiftly by regularly monitoring supply and demand and enacting stringent restrictions in water use, limiting Cape Town residents to only 50 liters of water or less per day.

Consistent press garnered much needed publicity and support from the international community. With joint efforts, Day Zero was pushed back from the initial projection of April 2018 to 2019.

In the case of India, it seems that a similar ecological shift in lifestyles, coupled with traditional, time-tested strategies may hold the key. Man-made reservoirs constructed using ancient technologies show promise in providing a secure and natural source of clean and drinkable water. Many are learning to adapt to the new ‘normal’, relying on age-old wisdom and knowledge in building and maintaining reservoirs. With irrigation channels dry and water towers non-functional, it seems a step back into the past is the way forward to a more sustainable future.