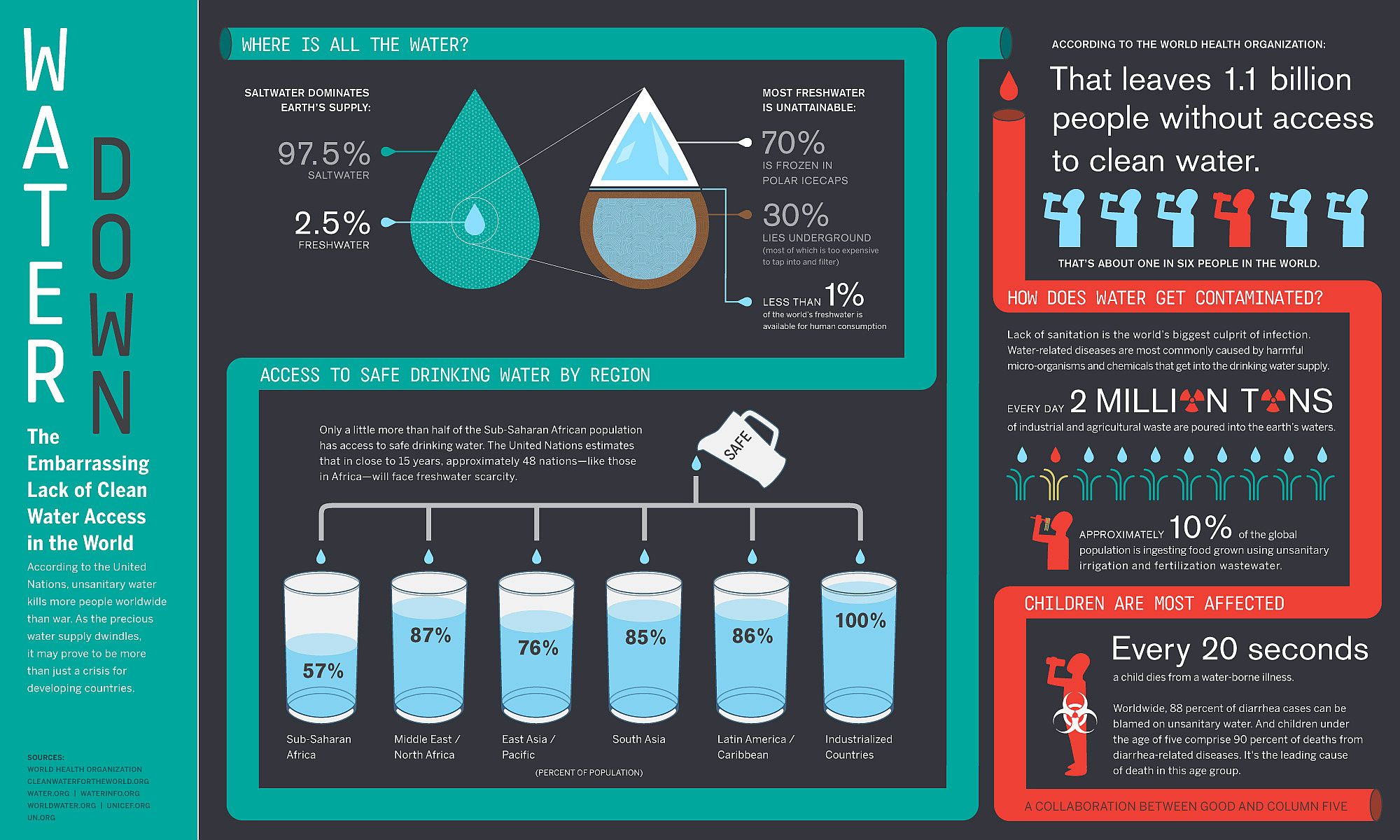 For Christians, water is both a necessarily fundamental ecological theme and also a spiritual symbol. These two perspectives are inseparable. Sharing water justice with wisdom is at the heart of environmental responsibility, and yet water is more than one natural resource among others: it evokes Christ himself who refers to himself as ‘living water’ and it evokes ways of new life, as in the sacrament of Baptism. Christian teaching has an immense range of references to the sacramental and symbolic dimensions founded in Scripture itself, evoked in the first theme. In the three following themes, this note will focus on the genre of more explicit ‘social teaching.’

I. Water as life and as death

The Creation account of Genesis 1 represents water almost as pre-created, as the chaos out of which the heavens and earth are given form – and also represents water as part of the creation as God gathers the waters together and called them ‘seas.’ This duality perhaps reflects the double power of water: it is experienced as destructive almost before it is life-giving. People have a primordial awe, a profound fear, of the sea perceived as a force that overwhelms the human capacity to control and limit its impact.

In Exodus, the sea becomes an uncontrollable weapon against the Egyptians, but is held in check by divine power so that the Israelites survive. In stilling the storm (Matthew 8:27, Mark 4:41), Jesus manifests symbolically to the disciples nothing less than this divine: ‘Who then is this, that even the wind and the sea obey him?’

However water is also life, for which human beings thirst desperately and without which the land cannot bear fruit (Isaiah 55:1, 10-11). Speaking to the Samaritan woman (John 4:7-15), Jesus uses the image of water as indispensable to life, then points to the ‘living water’ which he offers eternal life. His disciples can receive the gift of mediating this living water to others (John 7:38). That symbol would have no resonance for those who did not regard as precious the ‘natural’ resource of water.

The water crises in our world, as present reality and as future threat, are accordingly of opposite kinds: desertification and lack of access to basic water needs are major problems in sub-Saharan Africa while flooding, extreme rainfall events, and climate change impacts are devastating Asia Pacific and South Asia. The tsunami of 2005 and the case of the many millions in Bangladesh who live at less than five metres above sea level have made so many immediately vulnerable to global warming and the consequent unstoppable rise of the sea levels. In either case, in tropical rural communities, it is further the case that water-borne diseases are among the main threats to life.

This status of water is brought to bear politically in a communiqué published on 11 July 2013 by the Pontifical Council for the Pastoral Care of Migrants and Itinerant Peoples to mark the occasion of the 2013 World Tourism Day:

“We know that water, key to sustainable development, is an essential element for life. Without water there is no life. ‘However, year after year the pressure on this resource increases. One out of three people live in a country with moderate to high water shortages, and it is possible that by 2030 the shortage will affect almost half of the world’s population, since its demand may exceed the supply by 40%.’ According to UN data, about one billion people have no access to drinking water.”

II. Water as a human right

“The right to water, as all human rights, finds its basis in human dignity and not in any kind of quantitative assessment that considers water as merely as economic good. Without water, life is threatened. Therefore the right to safe drinking water is a universal and inalienable right.”

“The right to food, like the right to water, has an important place within the pursuit of other rights, beginning with the fundamental right to life. It is therefore necessary to cultivate a public conscience that considers food and access to water as universal rights of all human beings, without distinction or discrimination.”

One may give water a kind of objective priority here: people can survive without food far longer than without water. To recognise water as a foundation human right is to require that both political authorities and commercial entities do not act so as to deprive people of that right:

“Satisfying the needs of all, especially of those who live in poverty, must guide the use of water and the services connected with it. Inadequate access to safe drinking water affects the wellbeing of huge numbers of people and it is often the cause of disease, suffering, conflicts, poverty, and even death. For a suitable solution to this problem, it must be set in context in order to establish moral criteria based precisely on the value of all life and the respect for the rights and dignity of all human beings. (Compendium of the Social Doctrine of the Church, 484)

III. Water as a common good

In addition to the notion of ‘the common good,’ Catholic Social Teaching has notion of ‘common goods,’ elements so central to human life that they are for everyone. They are essentially gifts of creation and therefore must never be reduced to marketable commercial products denied to those unable to pay. In §.12 of his message for the World Day of Peace 2010 (If you want to Cultivate Peace, Protect Creation), Benedict XVI wrote:

“The Church has a responsibility towards creation, and she considers it her duty to exercise that responsibility in public life, in order to protect earth, water and air as gifts of God the Creator meant for everyone, and above all to save mankind from the danger of self-destruction.”

This position, repeated almost word for word in the 200 encyclical Caritas in Veritate (§.51) does not automatically rule any market in such elements, but insists that any market be subject to strict conditions.

Pope John Paul II argued the point at greater length in Centesimus Annus, 1991, §.40, where he argues that the status of ‘collective and qualitative needs which cannot be satisfied by market mechanisms’ means that the important advantages of markets are always subject to more fundamental criteria:

“It is the task of the State to provide for the defence and preservation of common goods such as the natural and human environments, which cannot be safeguarded simply by market forces. Just as in the time of primitive capitalism, the State had the duty of defending the basic rights of workers, so now, with the new capitalism, the State and all of society have the duty of defending those collective goods which, among others, constitute the essential framework for the legitimate pursuit of personal goals on the part of each individual.”

The Compendium of the Social Doctrine of the Church (§. 485) argues:

By its very nature, water cannot be treated as just another commodity among many, and it must be used rationally and in solidarity with others. The distribution of water is traditionally among the responsibilities that fall to public agencies, since water is considered a public good. If water distribution is entrusted to the private sector, it should still be considered a public good.”

Commercial and industrial activities that reflect corporate power or societal inequalities sometimes threaten to deprive the poor of their rights. It may occur through the monopolisation of water sources by mining corporations or agribusiness such as flowers grown in Africa for export to Europe; gross pollution through the discharging of chemical waste into seas and rivers; or even excess in the provision of leisure facilities sometimes linked to tourism, as when a golf course in a developing country uses more water than a village. Or it may occur when supposedly beneficial hydroelectric schemes drastically underestimate the human and environmental devastation that results or when the water supply system of a country is privatised and managed for profit by transnational corporations. From Water, an Essential Element for Life, a note of the Pontifical Council for Justice and Peace and published on occasion of the Third World Water Forum in Kyoto, Japan in March 2003:

“The most delicate and sensitive point in the consideration of water as an economic good is to ensure that a balance is maintained between ensuring that water for basic human needs is available to the poor and that, where it is used for production or other beneficial use, it is properly and appropriately valued.”

IV. Water as a scarce resource related to conflict

“Peace in and among peoples would also provide greater protection for nature. The hoarding of resources, especially water, can generate serious conflicts among the peoples involved. Peaceful agreements about the use of resources can protect nature and, at the same time, the well-being of the societies concerned.” (Caritas in Veritate, §.27)

This passage makes two related points: military conflict is among the most environmentally destructive of all human activities and secondly, water shortages are not only the result of conflict but often one of the causes.

“Growing pressure due to increasing demand for water can be a source of conflict. When water is scarce, competition for limited supplies has lead nations to see water as a matter of national or regional security. At the international level, conflicts tend to focus on shared river basins and transboundary waters, especially when combined with circumstances of low water availability. Tensions arise with increasing frequency over projects to dam or divert water by countries in a powerful position upstream from their neighbouring countries.” (From Water, an Essential Element of Life)

An example of the first source of conflict is the location of Israeli settlements in the occupied West Bank, since these are often chosen to secure prior access to aquifers in a situation of scarcity. Examples of the second type might be conflict over the rivers Nile and Mekong.

“Identifying potential trouble areas does little good if there are no effective and recognized mechanisms for mitigating tensions. Existing international water law may be unable to handle the strains of ongoing and future problems. But some mechanisms for reducing the risks of such conflicts do in fact exist. These need renewed international support and should be applied more effectively and at an earlier stage of potential conflicts.” (From Water, an Essential Element of Life)

1. A useful, quite short systematic discussion is found in Water, an Essential Element for Life, a note of the Pontifical Council for Justice and Peace, published on occasion of the Third World Water Forum in Kyoto, Japan in March 2003.
2. Although this memo limits itself to the Catholic Church, it is worth consulting the insights of other Christian Churches, for example that of Orthodox Patriarch Bartholomew of Constantinople, who in September 2012 issued a strong encyclical on the environment as a coherent part of his leadership. Water has been a central focus for this leadership, with campaigns to protect the Adriatic and the Danube.
3. There are also resources in Islam.