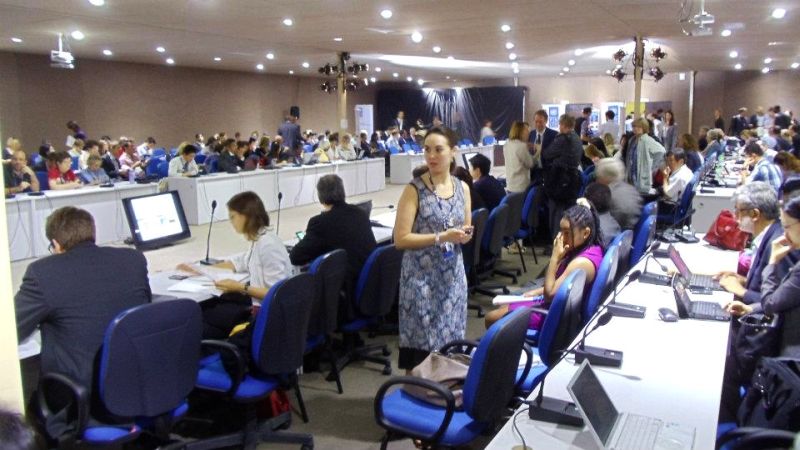 This Rio+20 Conference is an exhibition of countless groups coming from all over the world that aspire to bring a humane life while protecting the environment.  They demonstrate on the streets, they can be found near prime ministers at the official conference and they organize many public activities showing their local initiatives.

While it becomes clear in Rio that the final document of the Conference will confirm the small commitment of States to sustainable development, we can see once more that hope comes from people.

Today we had the opportunity to know Shweta, a beautiful Adivasi girl from an indigenous community in India, who spoke to us about her commitment to reducing the use of electricity in the villages.  This is a contribution to minimize the use of energy resources and promote environmental awareness.  Shweta works with Robert Athickal, SJ in Patna, India in an NGO called Tarumitra or “friends of the trees.”

Many efforts are dedicated in the world to accompany poor peasants to increase their harvests without chemicals.  This protects them from the dependency on chemical industries, looks after the soil, and helps them preserve the diversity of seeds.  There are many places where the Society is taking part in these efforts.

Many communities are defending their areas from extractive industries and big developmental projects that displace and dispossess them from their lands. This is a unique historical movement accelerated by the unceasing demand of natural resources that sustain our models of consumption.

Youth in the planet are becoming convinced that growth needs to be linked to protection of the environment, even though this might impact on growth, as Fondapol said today, based on a survey run among young people in the world about sustainable development.

We have also listened the UN Development Programme speaking about its efforts to evaluate growth on a basis that is not exclusively economic, as it is done through GDP.  Years ago they included education, health, and life expectancy as indicators to measure development.  Later on, they included equality and now it is the turn for sustainability, because there is no real development if it is unsustainable.  Non-sustainability condemns future generations to vulnerability.

The list of initiatives could be longer.  Prime ministers continue to dialog trying to reach viable agreements – with little success.  In the meantime, we need to sum up efforts in this collective construction of environment protection.  From this collective effort comes today any reasonable hope.

The clock is counting down.  We cannot be late in our commitment because the indicators of environmental damage and threatened communities are growing.  We are all called to use our creativity to generate new life styles: healthier, simpler, and more careful with environment.