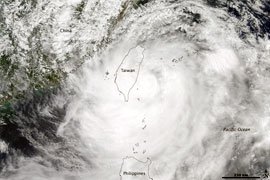 On August 2009, Typhoon Morakot (Typhoon Kiko in the Philippines) wreaked greater havoc than any other typhoon in Taiwan for the past half-century, and left the island with 461 dead, 192 missing and also feared dead, and around US$ 3.3 billion in damages.  The enormous amounts of rainfall that bore down on the island, peaking at 2,777 millimeters, triggered massive mudslides and flooding.  The entire town of Xiaolin was buried.

Last 22-25 June 2010, nearly a thousand scientists gathered at the Taipei International Conference Center to discuss the current understanding about the factors that induce such extreme events.  Recent findings from the work of around 4,000 scholars were presented at the Western Pacific Geophysics Meeting in Taipei in the desire to understand and help with more appropriate adaptation and mitigation strategies.

The factors of risk can be viewed from three different scales:

There is still much to understand about how the climate system works. Comprehensive records in the last 40 years show that there occurs, on average, about 90 typhoons a year in the world.  It seems that this number has not changed, but the severity of the storms has increased.  To understand this and related concerns, we need to look at the phenomena in the Pacific and the larger linkages.

The changes in global weather affecting the Western Pacific

Traditionally, we know the trade winds as the prevailing pattern of easterly surface winds found in the tropics and steer the flow of tropical storms forming over the ocean to make landfall in North America, Southeast Asia, and India.  As the trade winds weaken, more rainfall is expected in neighboring areas.  The merging of the trade winds from the northern and southern hemispheres is known as the Intertropical Convergence Zone (ITCZ), which is the area encircling the earth’s equator.

Almost 25 years ago when the scientists learned that the anchovy harvest failure off Peru’s coast was linked to broader climate patterns, we learned of the phenomenon of El Niño.  We understood El Niño was linked to the Southern Oscillation (ENSO) and is causing a shift in weather patterns in the Pacific and elsewhere in the world.  Since then we have learned there are two kinds of El Niño.

The standard one originates in the Eastern Pacific (EP El Niño) and is characterized by weak trade winds that leave the upper ocean warm by failing to drive cold upwelling, which is an oceanographic phenomenon that involves the rising of deeper colder water to shallower depths.  It usually occurs in cycles of three to eight years.

In more recent decades, scientists observed a non-canonical (which means not conforming to well-established rules or patterns) El Niño forming in the central Pacific known as the Central Pacific Warming (CPW) or CP El Niño.  Here, the cooler waters of the east and west flank the warmer central Pacific, and since the 1990s has become a common phenomena.

The El Niño of 2010 is of this kind. The effects of CPW are different from the EP El Niño, and are thought linked to global warming.  They are considered to have more damaging effects over a broader area, as warmer waters in the Central Pacific are associated with higher storm frequency.

Typhoon Morakot was embedded in such a large-scale convection region with a monsoon circulation of different time scales in the tropical Western North Pacific.  Three typhoons were linked in a gyre: Goni, Morakot and Etau.  Typhoon Morakot triggered well over 40,000 landslides in Taiwan, although most were no more than 10 meters deep and averaged a few hectares in size.  The mountainous terrain of Taiwan induces rainfall from the high clouds coming from over the ocean.  The prior typhoon soaked the ground wet, allowing the succeeding storm to trigger the landslides.

What does this mean to the rest of the Western Pacific region?

On the scale of the Western Pacific, what is happening in Taiwan applies to Southern China, Hong Kong, Vietnam, Thailand, and the Philippines.  We remember the recent massive flooding in China (June 2010) that displaced over 1.4 million people and with over 300 deaths.  Ginsaugon in Leyte Island, Philippines, was a village buried under a massive landslide in February 2006.  The landslide had a platform area of approximately 3,000,000 square meters that brought with it much of the mountain weakened by the fault line.

The infiltrated mountainsides in these areas were affected by the typhoon series of increased intensity.  These areas were saturated for a week or so before heavy rains of a second or third typhoon delivered half a year’s average rainfall or more during.  And frequently, in the most critical mountain areas, these events result in landslides, temporary dams on the rivers, and subsequent debris floods.

Engineering will have to cope with higher expected water levels.  The impacts on engineering in the region could be massive given the continued tunnelling and damming of water for lowland use and the major investments on stabilizing mountain slopes.  The interest of insurance companies is clear in the area of investment and infrastructure and is the one sector with a growing interest in what the scientists have to say today.

Unfortunately, the burden is greatest for the marginal communities, who are not simply the poor, but those marginal to the political and economic centers of decision-making.  They will absorb the most devastating hits to life and livelihood.  They are the ones faced with relocation and economic and social insecurity if they leave their lands.

Villages in the mountain valleys are usually the communities of the vulnerable.  These are communities without planning or infrastructure to withstand such events.  These areas need more comprehensive work.  Relocation of people in these areas is one of the biggest challenges in responding to their needs to stay in the traditional areas and, at the same time, not to use these evacuations as a basis to start further infrastructure projects for urban centers.

Agriculture in the uplands will include the promotion of erosion-controlling crops, development and promotion of efficient water use in the uplands, localized weather-based early warning systems to follow a dynamic crop calendar, agricultural insurance, landslide and flood preparation, methods for localized seasonal climate forecast system, and development of farming systems in inundated areas.  Long term adaptation includes breeding drought-resistant, pest and disease resistant, and flood-tolerant varieties, and the use of knowledge-based crop forecasting.

In the Philippines, the Climate Change Act of 2009 was passed into law after two devastating typhoons, Ondoy and Pepeng (known internationally as Ketsana and Parma respectively in 2009), resulted in massive flooding and landslides in Metro Manila and other areas in northern Luzon.  More than a thousand people perished.  The damage to crops, especially rice, was extensive and is not expected to improve if the country will not be prepared to adapt to the changes needed.  This is most critical as Filipinos now eat more rice than it can grow, and the Philippines now imports 10 percent of its rice from Vietnam and Thailand.  Food security is a major concern as extreme weather events bear down on the country.

In reviewing the lessons learned in the Pacific region and understanding the disasters, more effective action can be designed and planned.  Disaster preparedness begins with identifying such areas in the Western Pacific that are most at risk to the consequences of landslides and debris floods.   Because these areas will have vulnerable slopes and soils that are quicker to liquefy upon wetting and saturation, they will have a history of mass wasting.

With revisions from the original article in the ESSC News.