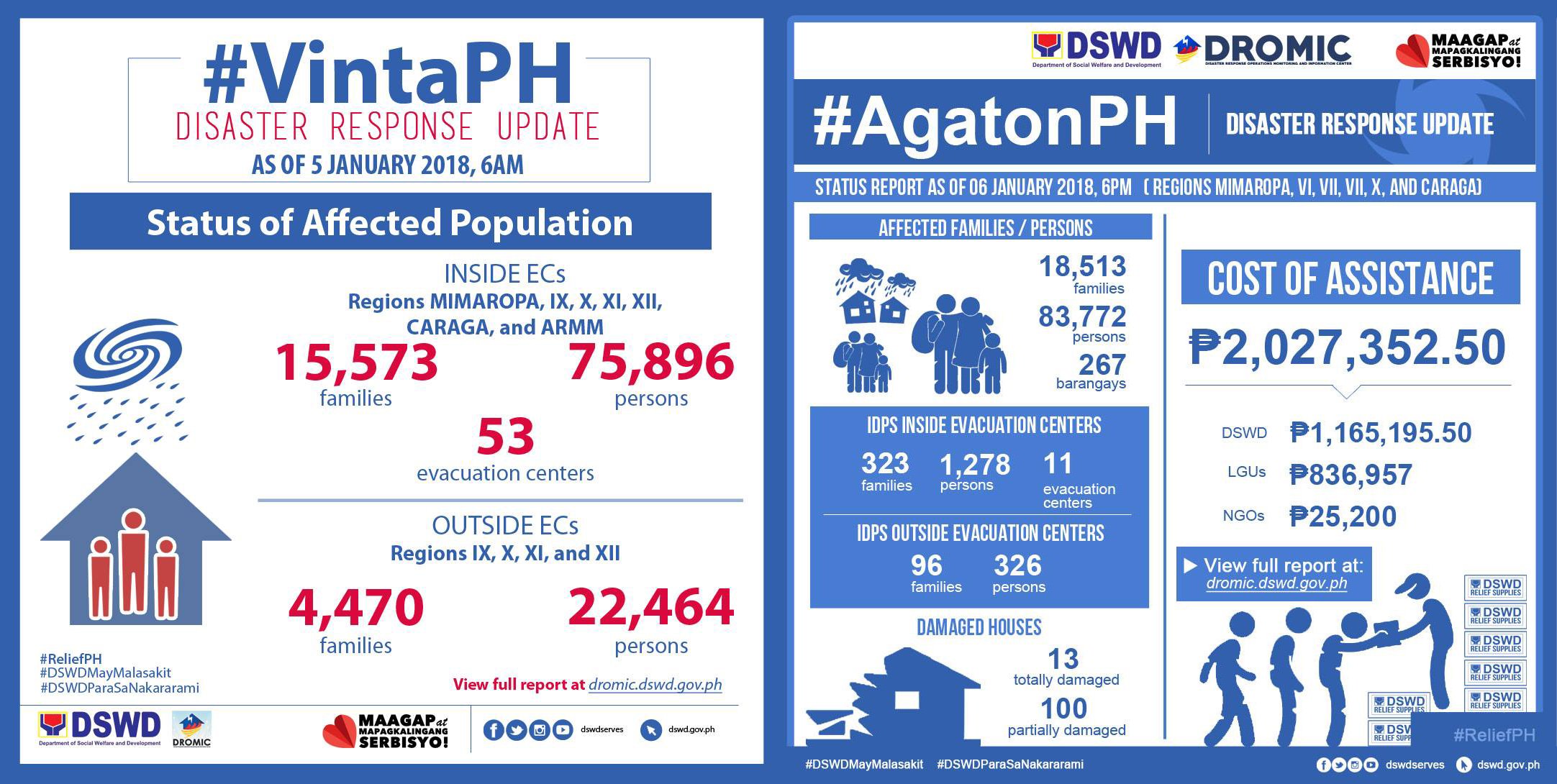 Storms and typhoons in the Philippines during 2017 went without massive disruption this year until 11 December when Tropical Storm Urduja (international Kai-tak) struck, followed by Typhoon Vinta (Tembin) and Tropical Storm Agaton (Bolaven) in the first days of 2018.

These storms came slow and heavy with rain, along a more westbound path (not immediately turning north) and on a more southerly trend, as is expected late in the season.

Vinta hit hardest the Mindanao provinces of Lanao del Norte and Zamboanga del Norte resulting in landslides and flooding, with over 260 deaths and much displacement in six provinces in Mindanao and two in Luzon.

The third hardest-hit province in Mindanao was Lanao del Sur, where the existing catastrophe of a war just ended in Marawi City and which was subjected to 136 days of the bloodiest war in the Philippines since World War II.  Thus, even before the rains of Vinta hit Marawi, there were already 200,000 people trying to resettle in a city reduced to rubble.

As of the present, there is limited information from the National Disaster Risk Reduction and Management Council on the scope and impact of the damage to lives, infrastructure, livelihoods, agriculture, among others.  Weather bulletins were regularly issued as the storms and typhoons passed through, but there was no information available for a post-disaster assessment, a service that was previously done and useful information for those who want to respond.

Likewise, the Disaster Response Operations Monitoring and Information Center of the Department of Social Welfare and Development (DSWD) has nothing on its website regarding relief action or needs.  An infographic summary that served as a disaster response update for Vinta and Agaton was obtained from the DSWD Facebook page.

Xavier University-Ateneo de Cagayan in Cagayan de Oro responded through: regular hazard monitoring by the Engineering Resource Center and which issued warning alerts; close coordination with the City Social Welfare and Development and the Philippine Red Cross in responding to internally displaced persons; and provision of water for shower needs and cleaning flooded homes in Cagayan de Oro City, among others.

Going out of the Philippines, the storm picture is larger with China, Japan, and Vietnam also badly affected this year.  A simple calendaring of events allows for a clearer perspective of the season and also an appreciation of the range of events from tropical depressions to typhoons and super typhoons.  This year, the typhoon season did not really begin for the Northwest Pacific region until July; oftentimes it begins in May.

The depressions and storms dominate rather than typhoons, and these events bring much more rain and possibility of extensive flooding and landslides. The typhoons with high winds can also create surges and coastal flooding while having disastrous impacts on infrastructure, crops, and of course poor housing.  Evacuations are an increasing norm in any area potentially to be affected and the impact is greatest on the most vulnerable communities with poor housing.

All of these storms had economic losses but the greatest damage was from typhoon Hato in August hitting China with a cost of almost US$ 7 billion and with over 50 people dead.  Another tropical depression hit Vietnam in October with 100 lives lost due to the flooding.  Typhoon Lan in October was one of the largest typhoons on record and the third most intense tropical cyclone worldwide in 2017 and while this is not a world record this year, typhoon Lan is nonetheless an indicator of an extreme event.

Though these events by definition have low winds, it is the slow-moving pace and intensive rains they carry that make depressions and storms so devastating for areas prone to floods and landslides in the uplands.  Typhoon Damrey at the start of November resulted in 142 lives lost in Vietnam.

The total loss of life due to Pacific storms this last year is 865 and total damages is running to US$ 14.3 billion.  The lessons learned are hardly new, but more people are learning them, and one would like to think the response is improving, which hopefully the research will show.

Yet it is not enough.

What we have to do

Preparedness and preparations are again the most critical and effective responses for communities and local governments located in areas with flooding and landslide hazards.

Broader and wider collaboration beyond known institutions and organizations need to be developed and strengthened while building teams who can engage on the ground.

Communication centers and ways for people to get involved are easily facilitated with social media and online networks but require integration with responsible local governments and national government agencies.

Society-climate relations need broader awareness so that there is full participation in the social recognition of the climate problems as they get worse and communities need to relocate within the area of livelihoods.

What we have to live through

Typhoon Yolanda (Haiyan) hammered the Philippine east coast in 2013 and the recovery is more like pulling back things to how they were before the disaster.  Some individual communities are able to build back better and people do understand storm surge now, but a positive and active resilience is limited.  Urduja went through eastern Visayas affecting Tacloban some of the same communities that Yolanda hit, and it is evident that evacuation centers are a focal point of accountability as so many homes are gravely at risk.

The opportunity for livelihood and collective community commitment to stream management, forest protection, fire control, among others, are the foundations for good housing and the necessary reduction in vulnerability.

It is not helpful to give a business response such as planting rubber trees and oil palm in sloping land (for the potential livelihood economic gains) and expect this vegetation to act like a forest in the upper catchment.

The response has to be integrated with the social, economic, and geomorphological realities of the area, the appropriate vegetation, and the extreme climate that we will have to continue to calibrate.

With worsening climate change, the problems are beyond the scope of present operations and we are all severely challenged.  National, regional, as well as global collaboration in the coming years for the best mechanisms are crucial if we need to respond effectively.

The major problem is far from being addressed.  There is not yet a proactive anticipation and communication of the problem as we can see with government responses to the preparation for and impact assessment of storm and typhoon events.

Globally, there are nine countries that completed their readiness programs to prioritize the Green Climate Fund and submitted their plans.  These are El Salvador, Colombia, Benin, Ghana, Kenya, Uzbekistan, Nepal, and from the Pacific, the Philippines and Fiji.

In the Philippines, a Doppler radar system is finally obtained using dual polarization that can tell the density of the storm, notably the volume of rain it is carrying, and this information does get communicated with warnings of intense and continuous rains.  But both the translation and communication of the readings, as well as the interpretation of the hazards on the ground in terms of the watershed are still gravely lacking.

With the recent flooding in Zamboanga del Norte, it is a “surprise” that extensive logging is still allowed in the Philippines and the magnanimous response of planting rubber trees and oil palms appears to compensate for any damage that might be done.

The absurdity of this dynamic is only one of multiple blind spots in natural resource management in the Philippines, and probably in many other neighbouring countries as well.