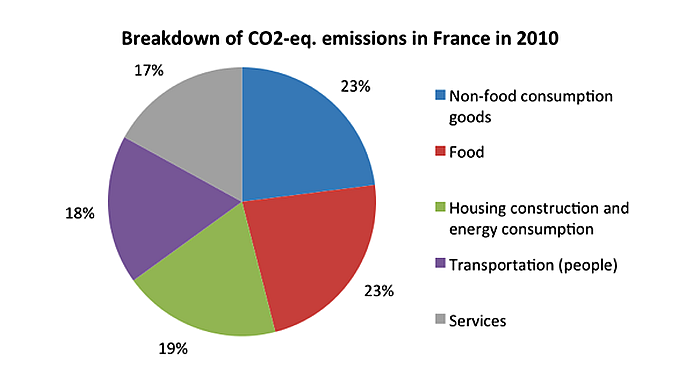 Moral duties are generally not much in fashion today. It is very easy to speak about must-see movies, must-do trips or must-have smartphone applications, but it has become pretty difficult to speak about what every person should do or avoid, for moral reasons.

As I share some efficient ways to reduce our carbon emissions, I would like to stress that being concerned about moral issues is not negative in itself, as if it could only be a subject of concern for moralizing Brainy Smurfs. Making moral choices is part of our nature and seeking what is good is essential to find real happiness. For this reason, reducing CO2-equivalent emissions is not just a matter of taste or preference in terms of a way of life. As a key moral issue, it deeply involves us.

Why bother about moral issues?

Indeed, what is at stake in our moral duties is really our happiness and our nature itself in the deepest meaning of the word. It would actually be very depressing to think that man is not made for justice, goodness, and truth, and that he can be indifferent to it. Jesus actually told us that the search for justice and truth should be our priority if we want to be happy and find real comfort: “So do not worry, saying, ‘What shall we eat?’ or ‘What shall we drink?’ or ‘What shall we wear?’ For the pagans run after all these things, and your heavenly Father knows that you need them. But seek first his kingdom and his righteousness, and all these things will be given to you as well.” (Matthew 6:31-33)

What is at stake is our nature itself. If justice is really good in itself, it has to find its roots beyond ourselves, in universal laws. It has become difficult to claim this universality today, because it is often preferred to think about moral choices as relative points of view. This makes it much easier for a man to think that he can be free or good whatever he does, but it actually empties at the same time the meaning of freedom and goodness of all that could have made it attractive. If subjective points of view are more important than truth, what is good or not is no longer a matter of respect or disrespect of values or principles that are universally good. They are only “good as far as I am concerned.”

Not only are we then robbed of what makes good attractive, but we are robbed of something that belonged to our inner nature and dignity, that is to say our ability to choose in total freedom to do universal good or evil. What remains is only an ability to make secondary and strictly personal moral choices about always debatable moral values. As GK Chesterton put it: “Do not free a camel of the burden of his hump; you may be freeing him from being a camel.”

This is important to have in mind these cultural biases of the contemporary world to seize the extent of our moral duties regarding climate change and energy issues. It is easy to underline the obvious lack of action taken to solve climate and energy issues as of today. As a matter of fact, in a 2007 publication by the European Commission “The 2°C target,” it was estimated that we should emit 18 billion tons or less of CO2-equivalent by 2050 to avoid a global warming of more than 2°C. However, we emitted about 47 billion tons in 2009 and emissions are continuing to increase. Total greenhouse gas emissions (GHG) increase by 1.5% every year in average since 1980. At that rate, emissions mathematically double every 45 years.

However, the importance of moral duties and choices to our very human nature means that we are not addressing here a merely political or physical question. Climate change and energy risks have human implications that raise unavoidable moral questions and questions of justice. This is also why each of us has a moral responsibility to respond to these issues independently of what other people think or do and even if our own personal efforts are not sufficient to solve the global problem.

What can we do personally to reduce our CO2-equivalent emissions?

What ways of life are sustainable? What should we do with ways of life that cannot be generalized? There is no simple answer but what is certain is that many of us, especially in developed countries, are called today to great efforts in order to live in much more sober ways. The countries that can be regarded today as developed (with an average gross domestic product or GDP per capita higher than US$ 25,000) account for 15% of global population but 65% of GDP and for 60% of historical CO2 emissions for fossil fuels since 1750. On average, one person consumed about eight tons of oil-equivalent (toe) in the United States in 2009 and about 4 toe in Japan or Germany, but it was 1.5 in Brazil or Mexico and 0.2 in Bangladesh. Similar gaps exist for GHG emissions. Average CO2 emissions from energy (about 65% of global GHG emissions) reach 4.6 tons of CO2 per capita globally, with 14.5 tons in North America and seven tons in Europe in comparison with only one ton per capita in Africa. If we are nine billion people on earth, we should emit only two tons of CO2-equivalent per capita in average (all emissions included).

In France, the total GHG emissions related to the French way of life reached about 10.5 tons of CO2-eq in 2010. Interestingly, these emissions were more or less equally split between five large segments:

This context makes it clear that reducing our carbon footprints must involve most dimensions of our ways of life, and require a personal commitment from each of us beyond mere political decisions. Some habits however have a higher impact than others and some of them are also easier to change. To conclude, here is a list of possible ideas in order to act, although we must be aware that there is no single silver bullet to solve the climate and energy issues:

These ideas, as well as the possibilities not mentioned here, imply radical changes in our ways of life for many of us. This is because the context in where we are calls for a radical response. Moreover, Christian people have a specific responsibility. “From everyone who has been given much, much will be demanded; and from the one who has been entrusted with much, much more will be asked.” (Luke 12:48)

Would it be even conceivable that those who have received Christ Himself in faith do not give a radical response to one of the great needs of our time? And this is the vital need to be less materialistic and to leave more room for God in our lives, to give more value to “being” than “having,” to direct as much as possible our lives towards what is just, good, beautiful, and true.

Guillaume Emin is an economist and lives in Brussels, Belgium. He may be reached through his email: guillaume.emin.mail(at)gmail.com.