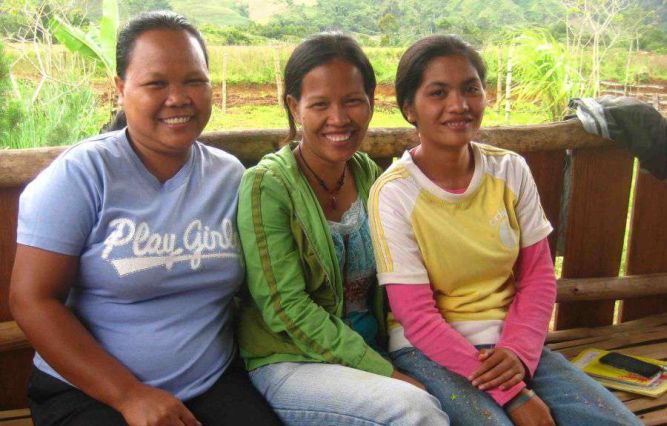 Today in the Philippines, the traditional respect for teachers as the point of truth and integrity in community is being whittled away, as has community.  And yet there are stories that show us all is not lost.

I watch the teachers in our mountain community in Bukidnon, Philippines struggle with lesson plans, themes, learning competencies, and how they try to work through these with children who, depending upon their age, have little awareness or vision of what might be their future.  These teachers, few of them professionally trained, teach in their own language the concepts and values of their people and their land.  That again is another huge challenge when the world dismisses them as the poorest percentile.

And then the classes must be cancelled, twice last January, as arms entered the village through the military and the armed rebel group.  Of course there was a risk of being caught in the potential crossfire of government and anti-government forces, but that was pretty low at present.

The real risk two months ago was that people would forget there was even a threat to their freedom because fear took over, in that they would be found out or be accused of involvement with the other side.  Nobody stuck a gun in our faces but we were all in denial that anything was wrong, as if guns had become normal.  Closing the school and sending the children home seemed to be the only wake-up call that arms in the community cannot be taken as normal.

The irony of arms in villages at times is that those carrying them also carry a certain air of authority, while trying to appear normal and showing concern for the poor and wanting to talk about needs and the opportunities for development.  The juxtaposition of concepts of arms and development is so confusing and suffocating of the truth (not to mention interviews seeking out taxes or surrenderees) that nobody will say the emperor has no cloths, or – in reality – the resident force has arms; no one at least, but for the teachers.

The teachers gathered and asked again, “Why have we closed the school?”  They too were tired and would like to avoid the strain of speaking up.  They draw strength from being together and having a clear focus of the children’s future grounded in having education.  They went through the appropriateness of the school policy twice invoked in a month, and checked the facts, not gossip or speculation: who, what, where, when, how. They sought out the truth number 1.

They show their unity, number 2, and they sought to respond to the needs of the children, number 3.  So they reviewed again, “How can we get the situation to change?  With whom do we talk today, what are our questions or clarification?”  Not demands, that is too dangerous and too easy for others to say “No.”

As teachers in the school, they are not compromised by relations with those involved.  They can declare a primary objective and hold up the community with integrity.  So they spoke with the tribal council, with the village officials.  None were easy, yet they asked the armed group again, “When will you leave, as there is a need to open the school?”  They meekly explained it must remain shut, as they will not take responsibility for any crossfire. They say the same to whatever group comes.  How common is this call for freedom from fear led by women across the world?

The only people left standing in the face of adversity and confusion are often the women, and frequently the teachers.  Here in the mountains where life can be weary as it is insecure, marginal to society, short on food and health, the teachers do not hide themselves from the compromises in facing arms.

The people here are confused and disturbed; all are implicated in the problems and the doubts, the mistrust, the dealings, and the accusations.  It is only when we come to pray can we go deeper and find a divine invite and a genuine response to care.  We have no power against the arms of might, and we do not seek any security of that kind, it never lasts.  What we seek is peace, attainable only through truth.  Always seeking the truth is the only way forward, is the only way to find forgiveness and reconciliation in community and across the land.

We are often driven to ask the purpose of life, not to be found in the politics and polices of our existence, but in a deeper personal sense of mystery and abundance of life.  Some of us gather each day to pray, we are calmed by Jesus’ response in troubled times, for there is a humble sense of righteousness, of truth, of wanting to be close to the Lord.  As we read these stories of different times and places, we experience how they elicit a sense of the reign of God.  As we celebrate, we experience how deep our faith is and find a consolation within and companionship around.  We turn to the psalm for a simple song of praise, praising God in the heavens and in all His Creation.  As with the swallows nesting in His house, there is no fear and all come together in acknowledging the God of the living.

The arms eventually left and amongst the teachers there was joy.  Though we are still struggling with awareness and acknowledgement within the community, there is great need for truth, reconciliation and trust amongst the people.  We think of how we can face the next armed group visit; we plan and we pray with greater hope.

What has this got to do with ecology?  Indigenous Peoples in Asia face all sorts of conflict, directly and indirectly, leading and subjugated.  Always there is opportunity for others to exploit the resources and the people, either because a colonial past inherited by a national elite or the new global market power says all resources must be made available at the lowest price and the weak shall only become weaker.

We cannot answer the failure of the political strategies, so we can only ask for leniency and the right for our children to learn with hope for a better future, where our land where we are bonded can be our home in peace, free from fear.

Pedro Walpole, SJ is Director of Apu Palamguwan Cultural Education Center that operates an elementary school for indigenous children in northern Mindanao, Philippines.  Last January 2012, the community where the APC school is located was visited by armed groups, resulting in the suspension of classes.  For further reading, please go to ESSCNews or ESSC .