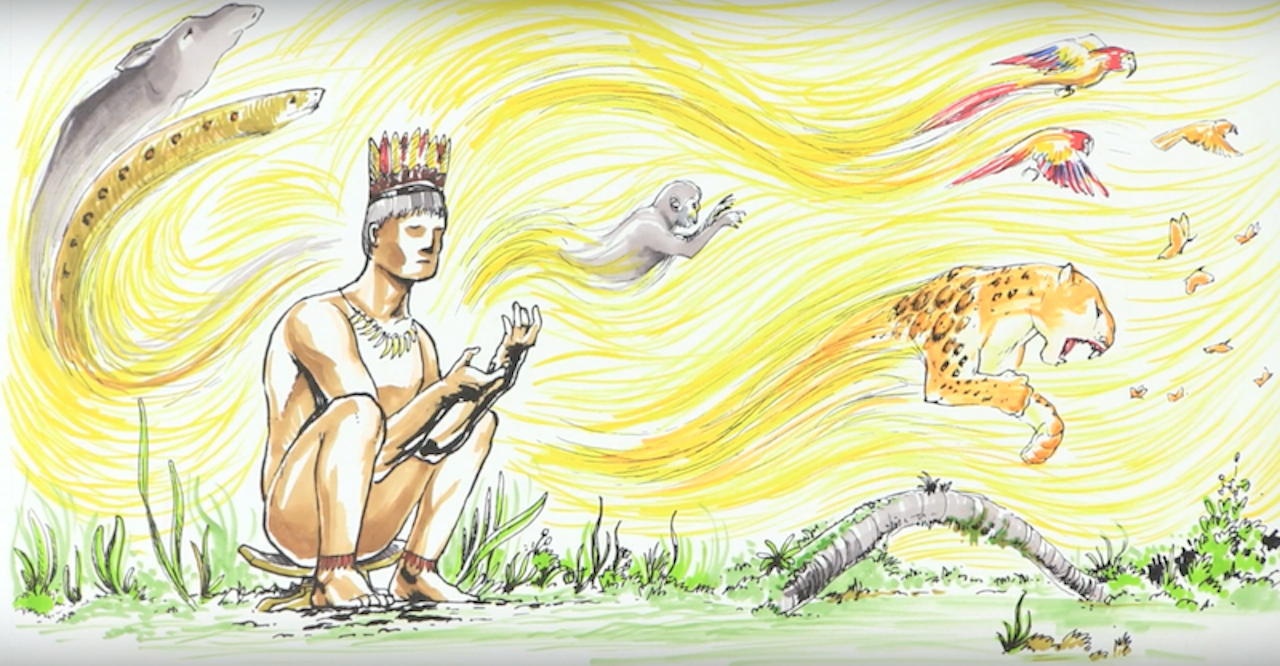 Why the Amazon is so important is a nine-minute video that Gaia Amazonas shared during the dialogue with the Ecojesuit team at the Pontificia Universidad Javeriana on 1 August 2018. The dialogue involved key faculty and officials of the university, members of the Conferencia de Provinciales Jesuitas en América Latina y el Caribe (CPAL), and other organizations working on the Amazon’s environmental and social concerns.  Ecojesuit shares the text that accompanies this video.

This is the Earth, and this portion here is the Amazon. As small as it may look when compared to the rest of the planet, it actually has a huge importance for life due to the part it plays in the water cycle and temperature regulation. We’ll talk about this and also about the role of animal life to illustrate how important it is to safeguard the connections between the Andes, the Amazon rainforest, and the Atlantic Ocean.

A very common metaphor to refer to the Amazon rainforest is that of a lung because it exchanges oxygen and carbon dioxide with the atmosphere which of course is crucial in order for all of us to be able to breathe. But the rainforest goes beyond that, so much so that a big part of South America would be a desert without it. But why?

Let’s begin by pointing out that water is mostly accumulated in the oceans. Although the sun’s heat evaporates it, making it go up in the air, it is still necessary for wind to push the vapor landward. Otherwise, water would not reach the continents, the vegetation would die, and large extensions would dry up.

The part where the Amazon enters this scenario is by enhancing the functions of trade winds. The Amazon attracts air and it also retains the groundwater. This is a fascinating hypothesis. It claims that forests are also responsible for the generation of winds because the trees’ transpiration creates vapor that condenses when it cools. Condensation lowers air pressure, creating a vacuum that sucks air out of the ocean toward the continent.  This process, multiplied by the 600 billion trees in the Amazon, produces strong, humid winds, almost like flying rivers coming from the Atlantic, and thus, the clouds and rain that hydrate the continent are created.

Now, in the continent, we find the Andes. This mountain range receives the water brought by the winds, hold it in their vegetation, distribute it all over the land through the rivers, and the rivers carry water back to the ocean, restarting the process. With this, we’ve covered the water cycle.

Now, let’s look at the temperature. We know carbon dioxide acts as a barrier that prevents heat from leaving Earth.  This is the famous greenhouse effect. Trees counteract this effect by absorbing atmospheric carbon dioxide in photosynthesis. Via this process, aided by underground carbon dioxide deposits, the Amazon removes more than a trillion tons of this gas every year, thereby delaying global warming which is a consequence of our excessive production of greenhouse gases.

There’s another way the Amazon regulates temperature – by making clouds. It turns out clouds, especially the whiter ones, reflect sunlight, preventing it from reaching the ground and heating us too much. The thick Amazon rainforest stores large amounts of water in its roots, so evaporation and plant transpiration generate seven times more vapor than does the ocean, which means many more clouds that will reflect more sunlight.

In short, regulating the amount of oxygen and carbon dioxide, keeping temperature within certain limits, and participating in the water cycle by creating winds and keeping water in the ground are some of the functions that the Amazon rainforest performs in tandem with the Atlantic Ocean and the Andes.

However, we still don’t have the full picture. What are we missing? Animal life!

We’ve all heard for example about the importance of birds for the dissemination of tree seeds. But every animal, every plant, every insect, even fungi and minerals – all of them play an important role in Earth’s physical chemical and biological processes.

Because looking at it from a broader perspective, the Earth is one single system – a self-regulating organism.  Every being that lives on earth is therefore a part of the big planetary organism.  So the resilience of the whole depends on the participation of each one. Animals make a notable contribution with their possibilities of movement and metabolism.  But there’s one particular animal capable of transforming Earth in previously unseen ways: humans.

The world is inhabited by various cultures with diverse customs and beliefs. The Amazon cultures as well as Western society are human groups that like all of us are part of the big planetary organism. But these two groups customs’ and beliefs imply very different relationships between them and the rest of nature. What kind of relationships have they had with the Amazon?

Let’s start with the Indigenous Peoples. Although there are more than 400 different cultures living in the rainforest, all of them actually share a common way of relating to nature. In their thought and their practice, they become one with the air, the water, the vegetation and the animals. So they acknowledge that their bodies and their very lives are interdependent with the rainforest and therefore act as the rainforest’s partners.

For the thousands of years of ties between the Amazon and the Indigenous Peoples, life has been completely sustainable in all its diversity. It would be a mistake to assume that they manage this by refraining from transforming nature. There’s evidence that one-tenth of the Amazon highlands used to be fertile land developed for human use. We also know that they have influenced the selection of species for ritual and culinary use. After all, they reached populations of millions living in the forest.

How did they achieve this balance?  With knowledge. Indigenous education prepares individuals to live in harmony with their natural and social surroundings. It teaches respect for the cosmic guardians’ spirits.

And this leads them to use resources responsibly and to understand that consumption affects the flow and distribution of energy in the global system. As a result, their practices are consistent with these ideas and they seek to preserve the balance that their actions touch. So, for example the cultures in the Amazon used to resettle every 20 years in order to let nature regenerate.

What about Westerners? Well their relationship has been different. Instead of feeling integrated in a totality, Westerners have thought of themselves in an isolated manner. In their process of cultural construction, they often create a particular dichotomy between nature and society. They insistently resort to nature for raw materials to build and sustain the space they’ve made for themselves: the city.

For this reason the Amazon has served them as a source of wood and oil and proved an obstacle to the raising of livestock, to name but two of the processes that end up destroying the balance between the forest and its creatures. It has been, in sum, an incomplete understanding of natural balance with undesirable consequences for life. Only now have Westerners begun to realize the importance of sustainable growth for their civilization.

For that precise reason, we have started a great worldwide ecological discussion. Today we want to say this a very important step towards sustainability is ensuring the preservation of the Amazon and its connection to the Andes and the Atlantic Ocean. Because this ecosystem doesn’t perform all those ecological functions as just a group of trees and rivers. Far from that. The forest the ocean and the mountains must be an ecological continuum for the flow of energy and information. This entails the flow of land rivers and air rivers, oxygen, carbon dioxide, and other chemicals, sedimentary rocks, as well as genetic information and cultural practices, so that all these elements together guarantee the diversity that gives more resilience to the whole system.

The work done so far has been very important and a great part of the territory that needs to be integrated into sustainable models has already been protected. Governments have made an effort to create protected areas and recognize indigenous territories. But there are still some areas that need protection in order to guarantee a full connectivity.

This connectivity will not only strengthen the environment services, the planet’s resilience, and climate stability, but it will also give us the opportunity to join forces with Indigenous Peoples to rethink our relationship with Earth. What is the best way to relate to it?  What makes up our wealth? What does our future depend on? This is an opportunity that can inspire us all, leaders and citizens, to look together for answers and make the right choices for us as part of one big global system – our planet Earth.

Gaia Amazonas works towards safeguarding the Amazon by supporting the strengthening of its Indigenous Peoples and reducing threats to their conservation.

2 thoughts on “Why the Amazon is so important: Joining its Indigenous Peoples in re-thinking our relationship with Earth (video)”