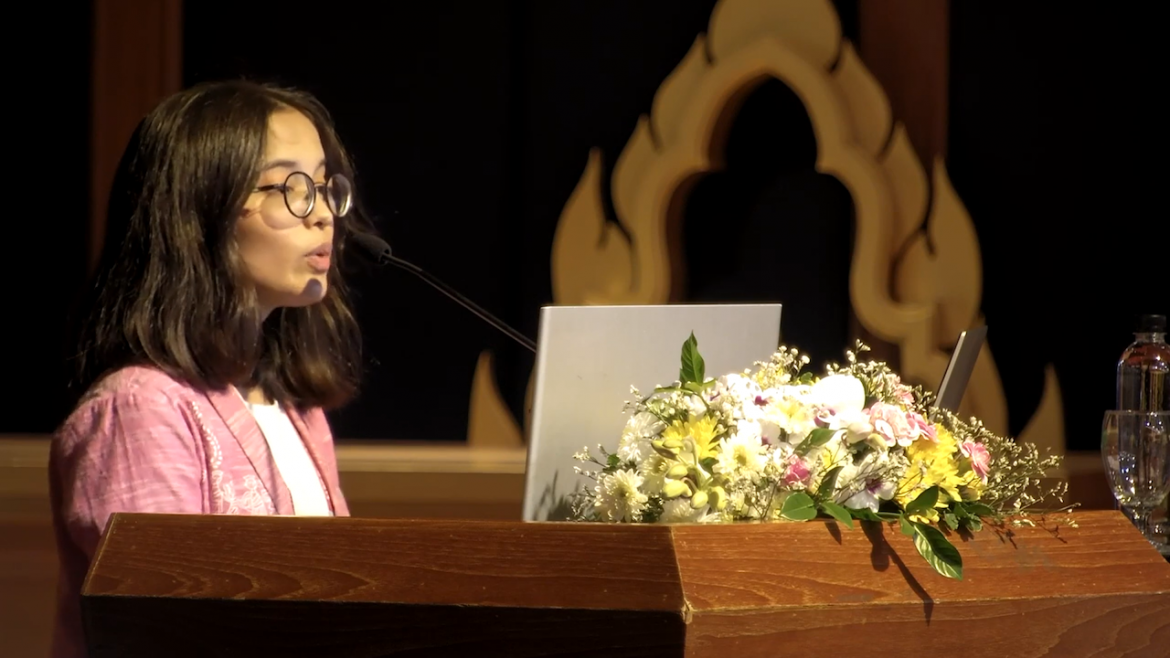 Ridhima Pandey is a 14-year-old climate activist from Uttarakhand, India, who spoke at the 50th General Assembly of the Federation of Asian Bishops’ Conference on 17 October. Ridhima shared how the climate-induced disasters she witnessed in her home state and the older generation’s failure to take action forced her to become an activist, her struggles of getting her voice heard by policy makers at the national and global levels, and her experiences from her dialogue with Pope Francis in the recently released film, The Letter.

When she was nine years old, she was the plaintiff in a climate change case filed in March 2017 with the National Green Tribunal (NGT) of India, arguing that “the Public Trust Doctrine, India’s commitments under the Paris Agreement, and India’s existing environmental laws and climate-related policies oblige greater action to mitigate climate change. It also argues that the term “environment,” as used in the Environment (Protection) Act 1986, necessarily encompasses the climate.” The NGT dismissed the petition on 15 January 2019, arguing that climate change is already considered in impact assessment and granting of environmental clearances. (Source: Climate Change Litigation Databases)

Ridhima also asked the assembly to provide a platform for youth voices to be amplified. With the Catholic Church undertaking its synodal journey and with COP27 fast approaching, Ridhima’s message reinforces the need to listen to the voices of the youth and the margins for justice and for a hope-filled future, and to strengthen commitments in better caring for the Common Home. Ridhima’s address at the FABC General Assembly can be viewed here.

Your Excellencies, fathers, sisters, and guests, my name is Ridhima Pandey. I am 14 years old and I am from India. I am from Uttarakhand which is a part of the Himalayan region, and it is known for its natural beauty. The holy Ganges River also flows there, but this treasure is now being polluted because of human activities such as deforestation, disposal of wastes in the Ganges, and a lot more.

I believe that many of you present here might already know that. My state has been impacted by cloud bursts, landslides, and flashfloods. Flashfloods are the reasons why I became an activist.

I was five years old when the Kedarnath flashflood occurred in my home state, Uttarakhand. I was sitting at my house and I watched the destruction unfold through the television. I watched kids crying and how they lost their parents and family members, how they cannot find their homes, and they do not know what they are going to do. I also saw my father going there to rescue the animals, and seeing that destruction got so much into my head that I started having nightmares about how I died because of a flood, that I lost my parents, my house, and how I did not know what I should do after being impacted by flashfloods.

For some time, I decided that I wanted to do something because I do not want to die. So I asked my parents what I should and can do to stop the flashfloods, and that is when I came to know about climate change and global warming. The climate of the entire Earth is changing, and I remember my parents telling me that I would be most affected, as India, just like most countries in Asia, is one of the most impacted places by climate change. But what makes me even more anxious is that the people most affected by the crisis are not the ones responsible for it. The kids of my generation are the ones most impacted by the crisis today and in the near future.

Currently, we are nowhere near limiting global warming to 1.5°C or even 2°C. The current policies would lead to 2.7°C or even more at the end of the century. This is what the IPCC report says: decision makers must do everything they can to limit the warming to 1.5°C. Every fraction of the degrees counts, as it matters to us all.

In 2017, I filed a petition against the Government of India due to their inaction to complete the promises they made during the Paris Agreement, and their failure to implement these pledges on the ground. This petition was dismissed in 2019 on the grounds that the government was doing everything they can.

But we all know that this is not the reality, it is not the truth. If the government was indeed doing everything they can, I would not be here talking about the climate crisis and worrying about my future.

And also in 2019, I, along with 15 other young people, filed a petition at the UN Committee on the Rights of the Child to protect the rights of children all around the world. Unfortunately, due to technical issues, the UN could not take it forward which has then impacted the lives of many children around the world. Millions of children are dying because of climate change or are living my nightmares and I do not want that.

Climate change does not impact each and every person in the same way, as the poorest and most vulnerable communities are the ones bearing the brunt of our wrong deeds. Climate change is projected to increase the number of people living in extreme poverty, from 32 million to 132 million by 2030.

Over the last decade, the mortality rate from floods, droughts, is 15% higher in the most climate-vulnerable countries. The gap between the economic output of the world’s richest and the poorest countries is 25% larger today than it would have been without global warming.

I still remember the day when all of us were waiting for His Holiness to come, and to be honest, it was one of the most nerve-wracking yet amazing days of my life. The moment he entered the room, I felt this very positive energy from him, as he made me feel seen and heard as an activist.

While we were filming The Letter, I learned more about Laudato Si’. In his encyclical, Pope Francis mentioned that we all have to come together to protect our Common Home. In the film, you will see and hear four different voices coming together in dialogue with Pope Francis in hopes of finding ways to care for the planet. We hope that this film will help you bring the message of Laudato Si’ to different communities in your country so that they will be able to join Pope Francis in his fight to protect Mother Earth for the coming generations.

If I would not have been an activist, the very first thing that would come to mind would be why kids become climate activists in the first place. Why is it important for us to be on the streets fighting for our rights?