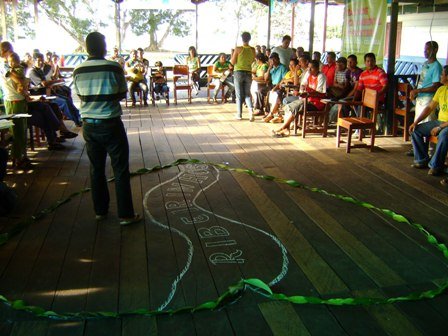 By the Itinerant Team of the Amazonia

The region will be (already is) very much affected by IIRSA. In the Amazonia the international economic interests are higher because of the richness of the soil and sub-soil, biodiversity, concentration of fresh water, etc. In order to get the richness of the region and to favour the low-cost of transporting merchandises from one ocean to another (Atlantic-Caribbean-Pacific) transoceanic roads and hydro-routes are being built associated with hydroelectric energy plants that will traverse the region in both directions east-west and north-south. Socio-environmental impacts in the region will be (and already are) very serious, as the pressure put on the legal framework of environmental regulation and, especially, the pressure on the land rights of traditional peoples (indigenous coastal African descent, etc.) won through much struggle and suffering in recent decades.

These major projects in the pan-Amazonian region cause two very strong impacts in terms of “human mobility.” On the one hand, these large works require a huge number of migrant workers coming mostly from outside the Amazonia region, and they bring a different view of the world and relationship with mother-earth. Many times, these people come into conflict with the traditional peoples of the region, which have a different worldview. On the other hand, large projects produce huge social and environmental impacts that displace traditional villages, making them “environmental refugees.” All these processes put at risk the systemic socio-environmental balance of the Amazonia biome with its implications and consequences for the planet and humanity.

The Amazonia is still thought by the interests from “outside” and not from the interests from “inside”, that’s for the good being of the Amazonia peoples. As result of this external view and all this “foreign development” the pan-Amazonia region is devoured by timber and paper industries, oil and mining companies, pharmaceutical and agro-business enterprises, hydropower plants, and it’s physically divided by waterways and large roads that cut up the forest and the traditional territories where indigenous peoples live. It must be added the role played by the drug mafias who took over the region by an army of gunmen and mercenaries imposing the rule of violence. Unfortunately, the immediate response of the states has been the militarization of the Amazonia region.

The logic behind this unfair developmental is to consider, in the social imaginary, the pan-Amazonia region as an “empty land” or “no man’s land.” The social conflicts from other regions of the continent are solved by pushing the poor to the Amazonia. The logic is perverse because it puts in confrontation “poor against poor”; poor migrants, colonists and settlers (foreigners) against indigenous peoples, riverside population and traditional inhabitants. We call attention to the fact that, throughout this process, the most affected and fragile are the “isolated indigenous peoples”. Out of the 100 groups of people which are in the world without contact with the western civilization (because they had very bad experiences at some initial steps of such violent relationship), about 85 are in the pan-Amazonia region, of which 75 in the Brazilian Amazonia. Many of them are about to be exterminated by the large projects of “development”.

The Amazonia is no longer a “backyard” but has become “central square of the planet”, coveted and fought for. It has become a major political and economic piece of negotiation between the great powers. One of the first regions of strategic interest to humanity that is disputed by many: its immense biodiversity with the new energy sources related to it; a fundamental source of fresh water in a horizon of scarcity; an irreplaceable reservoir of active principles for drugs and plants containing DMT; and its sub-soil keeps strategic minerals; etc; all this justify the strong interest by major world powers. But unfortunately the socio-environmental impacts that cause in the lives of indigenous peoples and traditional communities in the region, and depletion of natural resources, looks like they don’t matter.