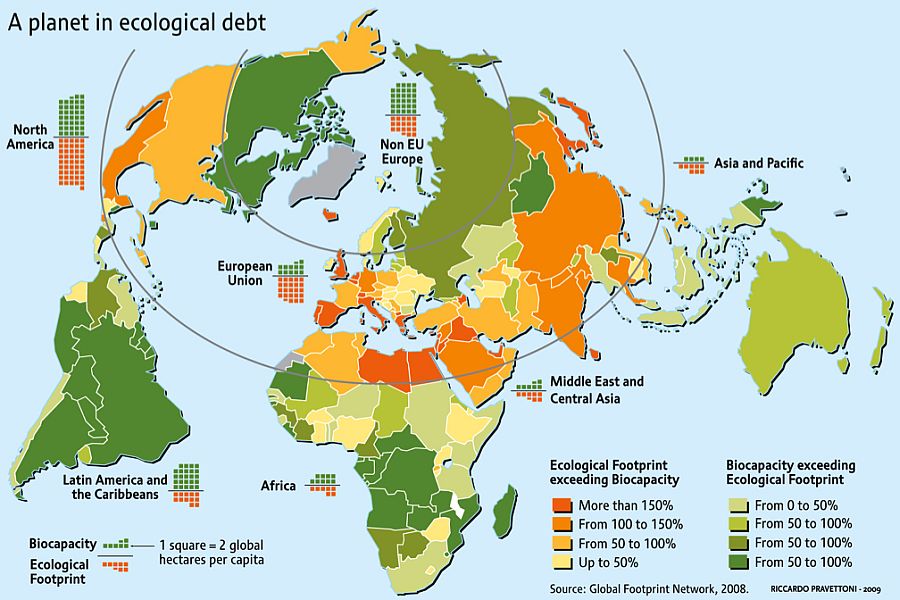 Nowadays, we live according to the rules of a consumerist neoliberal system which dominates the techno-scientific society with its false assertion, that our planets possesses both biotic and abiotic resources in unlimited quantity, and that human beings can exploit this supply without any ethical problem.  Economic value, it maintains, can be generated by converting natural resources into tradeable goods.  The more astute people within this neoliberal system appropriate the export benefits and pass on the damage and the costs to others.

The logic of capitalism is incapable of rescuing the planet from the environmental crisis.  Human beings are responsible for this ecological impasse since the end of the Middle Ages, with the rise and intensification of commerce and the first industrial revolution.  Moreover, capitalism has become responsible for the exploitation of natural resources, environmental contamination, and global warming.

Simultaneously, it is responsible for the ruinous human ecology that becomes visible in the ongoing commodification of life, in individualism, in the concentration of economic wealth and power, in increasing arms traffic, social injustice, and the loss of existential meaning.  This thinking insists that short-term enjoyment, along with the use and abuse of material goods, is the only path to prosperity and quality of life, as if happiness consists of possessing things merely to waste them, and not in ensuring development of better human beings and improving the condition of humankind.

It belongs to the logic of capitalism to appropriate the arguments of its opponents, presenting them as its own discourse, and to believe that such fallacies can correct its own mistakes.  This fallacy is feared by those leaders who are preparing an alternative model of the Green Economy that is to be discussed at the forthcoming Rio+20 Summit.  All those who still trust in the capitalist model are victims of this fallacy: perhaps they confuse capitalism with freedom and democracy, even if they blame their failures on capitalists: that is, those who profit dishonestly, corrupt politicians, reject the close regulatory intervention of the state, practice an ethics of double standards, and harm the citizens.  They are always those who keep their capital in tax havens and leave local economies in ruins.

Our contemporary lifestyle, determined by both scientific and technical knowledge, is an undesirable ethical path.  The high demand for goods and the intense consumption of natural resources are unsustainable, and we are putting at risk the future of life and its meaning.  How we can overcome this situation?  What are the characteristics of a desirable ethical path?

We urgently need a new ethical framework that adopts other priorities, such as the protection of life, natural resources and above all, the promotion of the common good.  This new ethical path should transcend considerations of custom, of commercial, medical or aesthetic benefit.  We therefore need a new ethic, a “bio-ethic,” which privileges the intrinsic value of “the biotic community” over any narrowly human interest, so as to overcome the current civilization crisis.  We appeal for the support of all world religions, that people of faith may be the carriers of this life-giving and deeply desirable ethos.

Gilberto Cely Galindo, SJ established the Institute for Bioethics at the Pontificia Universidad Javeriana in Bogotà, Colombia and is currently the Dean of the Faculty of Economic Science.