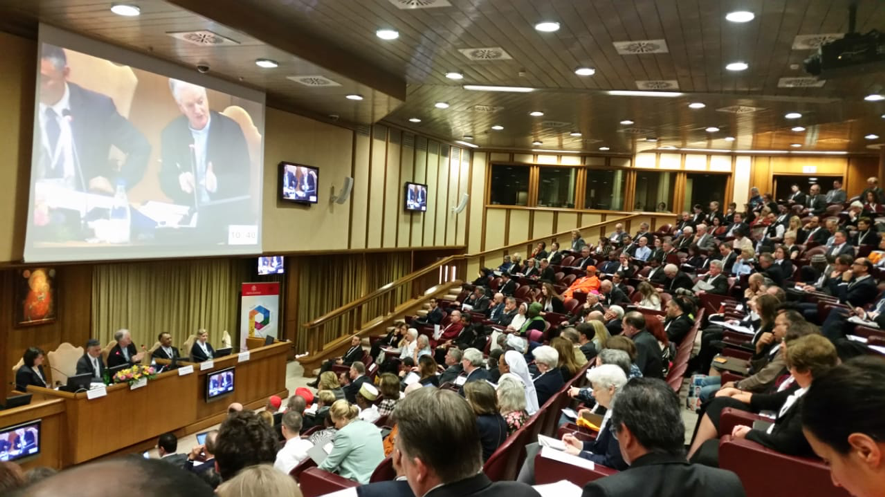 Organized by the Dicastery for Promoting Integral Human Development and the Pontificate for Interreligious Dialogue at the Vatican on 7 to 9 March 2019, the International Conference on Religions and Sustainable Development Goals  brought together representatives of different UN agencies and cardinals, leaders of the Catholic Church and other religions including the Jewish, Islamic, Hindu, Buddhist, Sikh, Jainism, among others, as well as development experts.

The conference intended to motivate the fulfillment of the UN Sustainable Development Goals (SDGs) and to promote the role of religions in contributing to the implementation and achievement of the SDGs based on the conviction that all people and institutions are necessary for its fulfillment.

In participating in the conference, I have drawn the following:

1. The initiative to unite religions at a high level in favor of the SDGs is very valuable.

It gives visibility to the role of religions and faith-based organizations in their work against poverty and in favor of human development.  It builds an internal narrative vis-à-vis third parties such as the UN.  The very important role of religious organizations in achieving the SDGs was highlighted.  For example, eight out of 10 people in the world consider themselves religious, religious institutions are responsible for 50% of the schools globally and in sub-Saharan Africa, 64%.  Religious institutions are also responsible for one-third of health institutions around the world.  Their investments amount to 12% of total capital invested worldwide.

It is a good example for all of us in this world, especially at a time when fundamentalism and populism are in vogue under various forms (radical Hinduism, jihadism in multiple countries, growing xenophobia in various countries of Europe against Muslims and Islam, anti-Semitism, among others).

It is exciting to see leaders and people of different religious traditions work and discuss together for the same causes.  The message sent by this example is very powerful

The event consequently has a symbolic value beyond the themes, presentations, contacts, or action plans that emerged, to try to reach a common understanding between different religious traditions.  In these times of much divisiveness that use religion as justification on many occasions, the effort of the conference towards listening and understanding is very powerful.

2. Common experiences and thoughts are found within the different religions, in particular the ethical and philosophical moral foundation on which they base their conception of the world, the “other”, and human development.

This is probably one of the richest contributions of religions to the discussions, on human rights, development and the humanitarian field.  Among key documents highlighted are Laudato Si’ and the Document on Human Fraternity for World Peace and Living Together, signed by Pope Francis and the Grand Imam of Al-Azhar, Ahmad Al-Tayyeb during a global conference on the topic in Abu Dhabi, United Arab Emirates in February 2019.

Many leaders referred to the work in SDGs as a religious and moral imperative.  According to Dr Gunnar Stålsett, Bishop Emeritus of the Church of Norway, “working for the attainment of the SDGs is a spiritual exercise and a moral imperative.  All people have been created in the image and likeness of God and share responsibility in God´s Creation.”

3. The coincidence and common element in the themes of peace, reconciliation, and ecology or care of the common home that is deeply connected to the spirituality of the various religious traditions was striking.

The influence of Laudato Si’ in the religious world is extraordinary as almost all the speakers continuously mentioned the encyclical and its messages.

4. The topics, speakers, and participants are very diverse and enriched the conference. The themes were grouped in the 4 Ps: People, Planet, Prosperity, Peace and Partnerships.

Food security, water, health, climate change were topics discussed in the People and Planet theme group.  The Prosperity theme group tackled work, production, consumption, and energy.  Peace and reconciliation was discussed by the Peace theme group, while the Partnerships theme group worked on the conviction that the SDGs cannot be achieved without the cooperation and participation of all.

There was a variety of panelists that included high-level religious representatives, public figures such as Vandana Shiva, the well-known environmental activist from India, UN senior representatives, and government representatives such as Dr Maria Flachsbarth, Parliamentary State Secretary to the German Federal Minister for Economic Cooperation and Development who was one of the outstanding panelists.  There were two young activists who talked about ecology and climate change, relating their presentation to the student movements taking place in Europe and all over the world.

5. Art and culture as connectors.

There was a cultural event on the first day – a concert by the Simon Bolivar orchestra of Venezuela whose members are young people from marginalized backgrounds.  Arab and Jewish singers also performed together, as well as a dancer who was a refugee, a Japanese pianist, and others.  During the conference, an artist was drawing the conclusions in a large mural at the back of the lecture hall.  The use of art was intended as a symbol to connect all in our diversity and that can be a connector for sustainable development.

6. I would like to emphasize the audience with the Pope and his message.

His focus on human people-centered development in all its dimensions and his call to commit ourselves to the SDGs that are based on “our deepest religious and ethical values” as well as his powerful call for an “ecological conversion” deepened the conference discussions.

Role of religions in the SDGs

Religions play a major role and in the words of Sr. Sheila Kinsey FCJM, paraphrasing Pope Francis: “We cannot postpone certain agendas for the future.  The future requires us to make crucial decisions in the face of conflicts around the world and the growing number of excluded people.  Religions have the global capacity to be present and to take charge of many of these issues.”

Valeria Méndez de Vigo is the Network, Advocacy, and Communication Coordinator of the Social Justice and Ecology Secretariat of the Society of Jesus.  Joining her in the conference were Pedro Walpole SJ, Ecojesuit Global Coordinator, and Rigobert Minani SJ.

These are the links to the conference’s full recordings of the daily presentations: