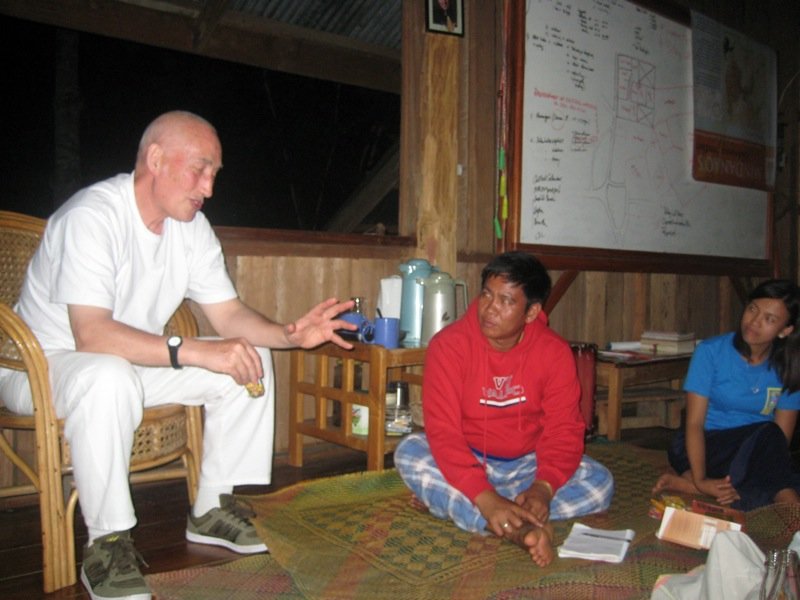 For Father Jorge Beneito, SJ, being in the Philippines is not an “alien” experience as the tropical weather of the country is what he was used to in Peru, having lived in the mountains and cool areas of Cuzco.

He spent 49 years of his Jesuit life in Peru, working on various projects in both rural and urban areas of the country.  Over the years, he longed to learn more about the East.  This prompted him to do his sabbatical in Asia, and the Philippines is a most practical choice because the country is predominantly Catholic and most of the people can speak English.  It was the natural entrance to the East.

Father Jorge is a Spanish Jesuit assigned to live in the Jesuit Community of Xavier University in Cagayan de Oro City in northern Mindanao.  He currently teaches various theology subjects in St. John Vianney Theological Seminary and gives workshops to students on hydropower and engineering.

Bendum is an upland village in the mountains of Bukidnon, a five-hour drive by land from Cagayan de Oro, and Father Jorge briefly visited the Pulangiyen, an Indigenous Peoples community, in early December 2010.

Bendum’s evenings are cool and Father Jorge found “Peru” in the Philippines, as he recalled the areas he lived and worked in Peru where the climate would also get cooler as the evenings set in.

“I came here not like a foreigner,” Father Jorge said a couple of times during his visit.  “The weather is the same, although in Peru it is much cooler at night and the altitude higher too (about 3,000 meters higher).  The trees around, surrounding the community, are somewhat the same as in my community near Cuzco.”

More than the physical attributes of the place, the situation and some of the concerns of the people in Bendum were similar to the communities he worked with in the past.  Poverty, marginalization, isolation, access to electricity, health services and education are similar concerns of the marginalized, both in Bendum and in Peru.

Father Jorge taught in universities in Peru, did pastoral and diocese work, partnered with the government for social development projects, and practiced his expertise in hydropower.  With a strong background in electromechanical engineering, he assisted numerous communities in Peru in providing electricity to isolated areas.  This work allowed him to closely engage with poor and marginalized communities, raising awareness of the communities’ needs other than that of electricity.

A very similar concern that Father Jorge observes both in Peru and Bendum is that of education.  Quechua is the “original” native tongue in Peru but Spanish is also considered an official language.  The children, especially those in the remote areas, thus face the same difficulty in adjusting their language when they go to school.  The children might speak Quechua at home but they need to learn and speak in Spanish for their education

In Bendum, the mother tongue is Pulangiyen but mainstream education dictates the use of Filipino and English as methods of instruction.  Furthermore, the nearest public school is a three-hour hike up and down the mountain, which is not ideal for children.

For more than 15 years, the Pulangiyen struggled with these education problems. Starting with a basic literacy and non-formal education in 1995, the community managed to develop a school that utilizes and promotes culture-based, multi-lingual education, by collaborating with a support organization and through generous local and international donations

The school, Apu Palamguwan Cultural Education Center , earned the recognition of the Philippine Department of Education in 2004 as one of the first Indigenous Peoples schools in the country.  Students have shown progress in learning because of the curriculum and language being used in school.  At present, they still struggle with problems regarding finances and sustainability, but their continuous desire to be educated helps them carry on and pursue this form of education for the children

Father Jorge finds the education story of Bendum inspiring, as cultural sensitivity, integration of traditions, and the use of “mother tongue” in basic education are ideas he wishes to share with his community when he goes back to Peru.

Spirituality of ecology in the context of culture sensitivity

The Pulangiyen people have a deep relationship and understanding of the forest, water, and all life in their area.  Taking care of their environment is central to taking care and sustaining their culture and identity.  Father Jorge observed this “oneness with the earth” and relates this back to his experience in Peru

“We have this term, pachamama, which means mother earth.  In gatherings, even in informal drinking sessions amongst friends, there is always something that is offered to the earth.  It is a way of showing our understanding that we are a product of mother earth so we have to honor the life and other sources of life, such as food and water, that were given to us by mother earth.  We have to nurture mother earth.

“Although the natives, the indigenous people, do not share the same belief as Catholics and Christians, their relationship with the environment is not far from the teachings of our church.  The church teachings say that we are the entrusted stewards of the earth and therefore we are called to take care of it.

Father Jorge explained further his thoughts on the environment and the “spirituality” involved in taking care of it.

“But Christianity is also about that, about working for others, for human development.   The planet, the earth, nature will evolve whether we like it or not.  But if we as people can be more responsible in reducing the negative changes in nature, then we ought to find a way on how we can do that. This is part of our role as stewards of the earth.”

The Light of Christ in the world

The Environmental Science for Social Change has been working with and for the community in Bendum and recently established a micro-hydro power source in the area.

At present, only a few of the buildings in area (which includes the school, research facilities, and the tribal chieftain’s house and guest house) are provided electricity.  There are numerous reasons for such limitations and includes legal concerns and preparedness of the community.

Father Jorge wanted to discuss the possibility of how electricity can be distributed to the community because he has done so with numerous communities in Peru but he understood the limitations.  Despite this, he still managed to impart his rich knowledge in hydrology by giving maintenance instruction and tips.  He also shared stories about establishing hydropower in various communities in Peru which showed the same principle as that in Bendum.

“When you give light to the community, you automatically give them a venue to converge.  Whether it’s lighting a possible hall, a chapel, or a sports complex, you are widening an opportunity for the people to commune.

“Christ said, ‘I am the Light of the World,’ and by providing electricity to a community, giving them venues to commune, you make real Christ as the Light.  Christ is light, physically and symbolically.”

You can read more about the Pulangiyen community of Bendum and the work of ESSC at www.essc.org.ph and at www.apc.essc.org.ph.