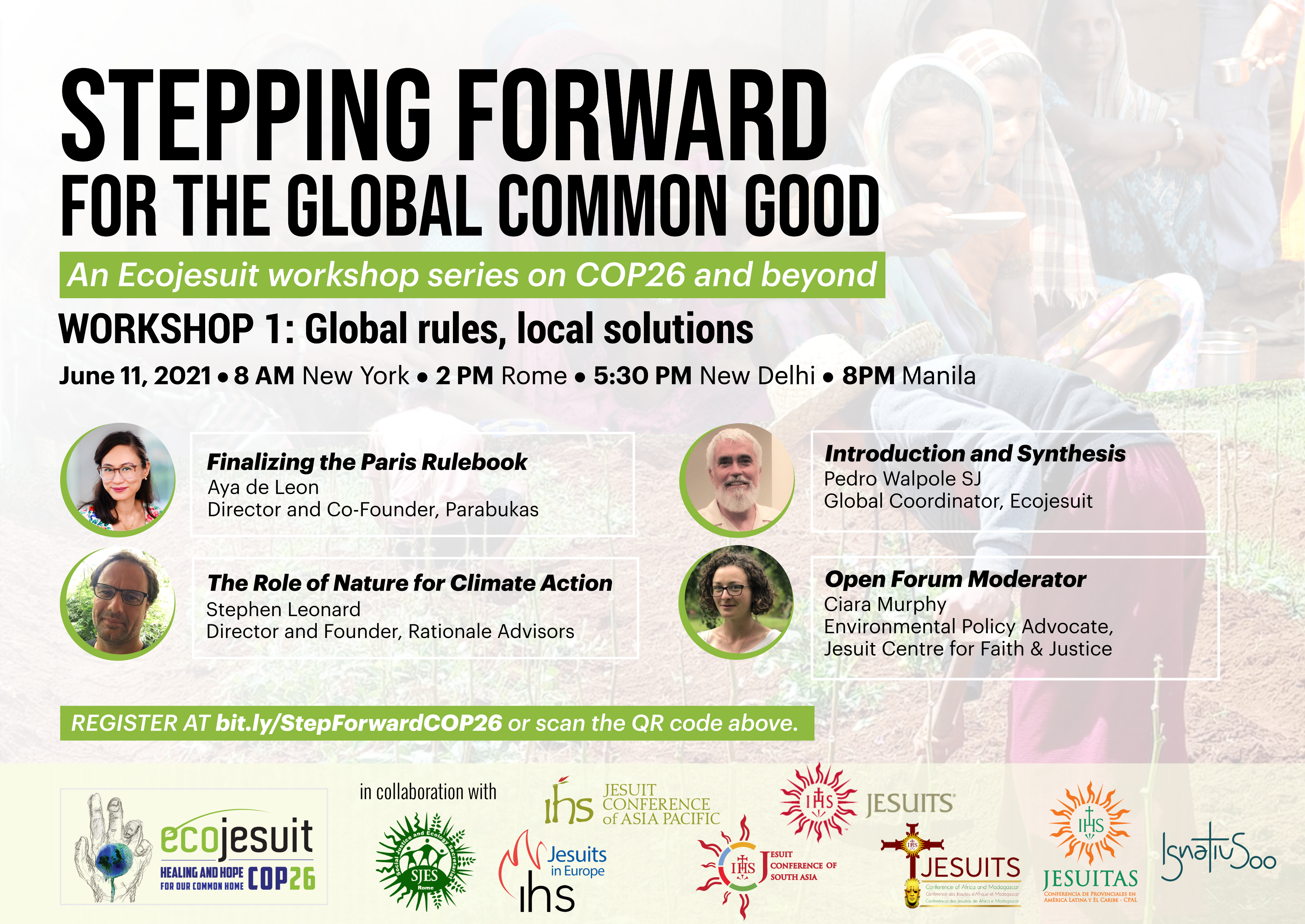 Ecojesuit launches Stepping Forward for the Global Common Good, a workshop series to promote the urgency of understanding and participating in the COP26 process that tackles the five key points for decision in COP26 in Glasgow in November.

This effort also advances the Ignatian commitment to advocate for climate justice and hopes to animate the collaborative actions emerging among Jesuits and partners even beyond COP 26.

The five key decision points in the COP26 negotiations that Ecojesuit and partners identified as critical for people and nature are:

1. Finalizing the Paris Agreement in full, so implementation of the Rulebook can begin

2. Finding solutions that respect human rights and allow all nations to achieve net-zero targets by 2050

3. Mobilizing US$100 billion yearly in climate finance for developing countries and shifting to policies that promote more sustainable economies like the European Green Deal

4. Ensuring business accountability for their emissions and negative impact on the environment and communities

The first workshop, Global Rules, Local Solutions, will be held on 11 June and focuses on the Paris Agreement Rulebook and community-led nature-based solutions.

Introduced in COP 21 in 2015, the Paris Agreement Rulebook starts the engine of climate action implementation on a global political level. While ratcheting up the commitments of countries to reduce carbon emissions is part of the process, what the Rulebook is about is turning on the engine.

It is important to bring the political engine for climate change together and endorse genuine nature-based solutions. Both the Rulebook and the NBS draw strength from a shared gratitude for creation and the environment that are in solidarity with local needs and the common good.

We need to engage in this new normal for climate action and the common good that Pope Francis described in his Apostolic Exhortation, Evangelii Gaudium, weaving together the oikos of ecology and the oikos of economy. It is hoped that these workshops will highlight with clarity the nexus of climate change with water, land, biodiversity, food systems, and culture as part of the local-global Ignatian response to the UAPs, Laudato Si’, and Fratelli Tutti.

This is the new normal for climate action – one that involves the political wherewithal and the sustainable participation of people who are most vulnerable to the changing climate and socio-economic marginalization. These are the two key political-economic engagements in reversing climate patterns – putting in the finance for every country and putting in the necessary politics to move the climate actions. This is what COP21 was not able to do and we are no longer saying “let’s do this”, but rather, “we are doing it, so join us!”

Ecojesuit invites those interested to join the first workshop, Global Rules, Local Solutions, on 11 June 2021, Friday, 2:00-3:30pm (Rome) and register through this link.

Featured speakers have been involved in international climate negotiations for several years and seek ways to bring greater local participation to the COP process. Aya de Leon from Parabukas will give an overview of the Paris Agreement and the Paris Rulebook and Stephen Leonard from Rationale Advisors will talk about the role of nature in climate action and emerging discussions on nature-based solutions. Ciara Murphy, Environment Policy Advocate at the Jesuit Centre for Faith and Justice, will moderate the open forum.

The next Ecojesuit COP26 workshops and tentative dates are:

For more information or proposals for collaboration, please contact Brex Arevalo at ecojes.networking@gmail.com.